In September 2015 my wife’s uncle Graham came to visit for the weekend. During this time he informed me of an extended UFO sighting he and others experienced while on holiday in Clyro near Hay-On-Wye in the summer of 1981.

In August 1981 Graham (who was 13 at the time) went on holiday with his parents, Aunt Lynn, and Lynn’s friend Claire. They were staying on Princes caravan site (Now known as Borders Hideaway), West of Clyro.

Aerial map of the campsite today showing the position Graham's caravan was situated: Modern photograph of the campsite entrance: 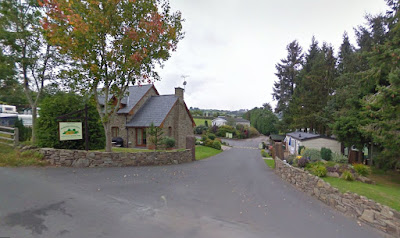 It was about 8pm in the evening. The sun was beginning to set, and it was pleasant still weather with very little cloud. Looking out of the window of the caravan Graham noticed an unusual light in the sky to the North West over the Radner montains. It appeared to be about 2-3 miles away and at a height of around 2000 feet.

The light was flashing red, yellow and green in a regular pattern. It would stay lit for several seconds, then switch off for several seconds before coming back on in a different colour. It’s movement pattern seemed far too erratic for an aircraft or helicopter. It was drifting backwards and forwards across the sky, regularly changing course in slow gradual turns at about 35-50 mph.

After a couple of minutes of watching the light, Graham called everyone else to watch it. Upon seeing the light, everyone headed outside to get a better look at the object. There was no-one else around at the time as the site was not particularly crowded. Unfortunately nobody had a camera with them at the time.

Puzzled by its appearance, everyone watched it for about 15 minutes before returning back inside the caravan. Graham continued to observe it from the window. After about an hour the object began to move in the direction of the campsite. It got to within a mile of their location and also descended in altitude to about 1000 feet.

The sun had now set and it was quite dark, but Graham could see a flattened disc shape with squared off ends. The pulsing light was coming from the centre of it. After watching it for a number of minutes, the UFO increased dramatically in speed and shot away to the West extremely fast. Within a second it was lost from view from the window.

Graham continued to watch for 15 minutes to see if it would make a reappearance but it did not, so he decided to go to sleep. The next day he checked on the news to see if anyone else had seen the object but there were no reports mentioning it. Claire mentioned that she had seen a similar object on previous occasions.

This is an interesting sighting for a number of reasons. The length of time the UFO was observed for is quite unusual. Most sightings take place between a few seconds and several minutes, but this object was watched for over an hour. The colours which the light was flashing do not fit in with normal aircraft navigation lights. The manoeuvres of the object means it cannot have been an aeroplane, and the appearance of the object when it moved closer confirms that it was not a helicopter. The stunning increase in speed which the object performed when it left the area also put out of the question that it was an unusual lit inflatable or remote controlled model of some kind. Looking at all these aspects it seems probable that this was a genuine sighting of an advanced craft, possibly of extra-terrestrial origin.

I would like to thank Graham for coming forward with this information and allowing it to be published on the BUFOG website.