Richard Upson is a heavy metal/rock musician, and has written original pieces for me to use with my lecture presentations. Back in 1978 he and a friend had a fascinating UFO sighting which he has shared with me.

Richard used to live on Somers Road, Malvern. In 1978 when he was 16 years old he would regularly stand outside after dark and watch the stars. One evening he and his friend Kevin had been out sky watching on Link Common and were walking back home. It was a very clear and still evening with very little cloud cover. 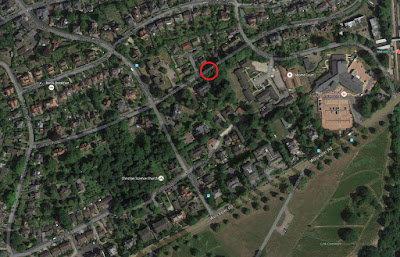 They had almost reached the garden gate. Looking overhead Richard could see what initially appeared to be a bright star. It was there for an extensive period of time and completely motionless. Suddenly without warning it split into two identical points of light which immediately began moving away from each other! The acceleration was instantaneous. Richard pointed out the moving lights to Kevin. One headed South a little faster than a satellite would tend to move at. The other initially moved in a North East direction. However it soon began to move in a wide circular arc. It continued turning until it had gone completely round in a circle, and then continued away into the distance to the North East.

In total the sighting lasted for about 90 seconds until both objects had vanished into the distance. The boys immediately ran into the house and excitedly told Richard’s mother Anne what they had seen. They then rang the local police station to report the sighting. The officer they spoke with recommended that they contact nearby Worcester-based UFO organization Sky Scan, which they did soon after.

The following day Richard wrote a letter to the MOD to report the sighting. He soon received a standard response letter from them, thanking him for his letter but not providing any explanation to what he had seen.

Unfortunately Richard has not kept in touch with Kevin so I cannot speak with him about what happened. However below a direct statement from Anne about what she recalls took place:

"It was late evening, just dark, in the summer of 1978 when my son Richard and his friend Kevin came rushing indoors at our home in Somers Road, Malvern. Both were white faced and breathless. They had been walking home down Worcester Road and round Osborne Road to our garden gate, staring upwards, when they became aware of what they thought was one of many stars In the sky above them, splitting in two. One continuing towards the South, the other completing a 360 degree turn and disappearing to the North East. The boys were very shocked and puzzled by this strange happening and rang the police in Malvern where an officer suggested they report the sighting to Sky Scan in Worcester who were interested in their story."

This is an interesting distant sighting which appeared to be of unidentified objects in orbit. Obviously all that was seen were points of white light, however the moment patterns they performed is what makes it impressive. Let’s first assume that the objects were out in space as they appeared to be, rather than at high altitude in the atmosphere.

They could not have been satellites as these move on a straight course at a constant speed, they cannot move from a standing spot or change direction at all. Meteorites cross the sky extremely fast and again move in a straight line. It appears that the objects were under intelligent control. At the start of the sighting there only appeared to be a single object, at which point it was indistinguishable from a star. It is only when it split into two and began instantly moving that the boys took an interest in it. It is impossible to say whether it was a single object that separated into two, or whether it was two objects in close proximity that looked like one until they began moving away from one another. If we assume that the objects were spacecraft of some kind, then nothing we currently know about would have made such manoeuvres.

There is the slim possibility that the objects were actually at very high altitude rather than in outside the atmosphere. If this were the case then the only reasonable explanation would be two helicopters. Lit inflatables seem very unlikely for a number of reasons. The lights were white so could not have been Chinese lanterns, as these are usually amber orange in colour and tend to flicker in brightness. Also they were not available to purchase back in 1978. LED balloons have only been available in recent years. Also the movement patterns observed were too directed to be inflatables drifting on air currents.

Aeroplanes cannot remain still in the sky for a period of time. When viewed at the horizon they can appear to hover if flying towards the observer, however the point of light the witnesses initially observed was overhead so could not have been a plane. Nor does this explain how it could split into two. It seems improbable that the objects were helicopters. If this were the case then initially they would have to have been positioned one directly above the other so as to appear as a single point of light. Also even at high altitude it is usually possible to see other navigation lights or flashing strobes.

Looking at these possible explanations, it seems much more likely that the objects were in orbit, and were also under intelligent control. Do we have manned craft out there which we have not been informed of? Or were these objects of another origin entirely?