Witness Joanne Twigg has had several sightings of Unidentified Flying Objects which all took place in 2008. After finding the BUFOG website online, she decided to send us details of her latest sighting. I interviewed her over the phone about this incident, and it was then that she also mentioned another two previous sightings. This report will examine each of these sightings in detail, starting with the most recent.

It was 6.50pm on a very sunny, clear and still day in the middle of September 2008. Joanne was sitting on her lounge floor of her house on Stanley Close, watching TV. She happened to glance out of the lounge window into the sky. It was then that she noticed an unusual object slowly moving towards her from the North. At first she thought it was a bin bag drifting in the wind, but soon realised it was something entirely different. The object was a diamond shape with rounded corners. It was dark matt grey in colour, it looked metallic but was not shiny. The object appeared to be about the size of a large family car. It appeared to have weight to it rather than being completely flat. She estimates it was about 500 foot in the air, and it was slowly moving towards her position. Strangest of all, the object was rotating constantly over and over, rolling on a completely straight path.

Drawing of UFO (Drawn by myself from witness description): 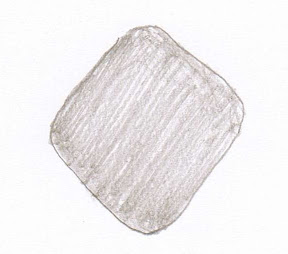 Joanne was very excited at seeing the object and was sure it was something highly unusual. She ran upstairs to her bedroom to try and get a clearer look at it. She had a video camera but unfortunately it was out of battery charge. So instead she grabbed her binoculars and attempted to find the object through them, but was not able to locate it. After a couple of minutes the object reached her house and flew over the top of it out of sight. Joanne then ran out into the back garden to continue watching the object. 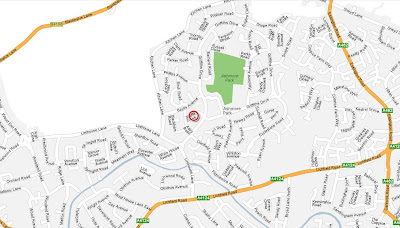 She watched it for seceral more minutes. When she went outside she noticed that there was no sound coming from the object. It continued on its straight course until it went out of sight into the horizon. Joanne believes that others may have also seen it, as it was a very clear evening so it would have stood out against the sky.

The appearance of the object, and movement pattern observed in this sighting are both very interesting. Obviously most explanations can be discounted due to its unusual shape. I asked Joanne if she believed it could have been some sort of kite or inflatable that was drifting and rotating due to the wind. She is adamant that this does not adequately describe what she saw. She says the object was not flat but had width to it. It looked solid, structured and metallic. She also says that the flight path was far too direct, the object looked like it was under control and being flown like an aircraft, rather than just drifting in the wind. We must also remember that it was a very clear and still evening (Although there could possibly have been a stronger wind at that altitude). Could the object have been a remote controlled model of some kind? This explanation seems very unlikely, especially as it continued on its straight path until it went out of sight, and had no visible means of propulsion. There have been numerous UFO reports in the past which have mentioned rotating craft – could this have been it’s method of propulsion? It is certainly an unusual sighting, and one which will remain intriguing.

Earlier in the same year, Joanne had a very different UFO sighting which again took place at her house. It was around 5pm and a sunny evening, mostly clear with only a small amount of cloud. As with the September sighting, it was also very still. She cannot remember the exact date. She was in her lounge using the computer when she glanced out of the window into the sky. She noticed what looked like a small gold/silver metallic orb. She estimates it was at least 2000 foot up, about the height a jumbo jet would fly at. It appeared to be within a mile of her position. At first it appeared stationary, but after about 30 seconds it began to move slowly in her direction. She ran into the kitchen to get a better view of the object but it had completely vanished.

Drawing of UFO (Drawn by myself from witness description): 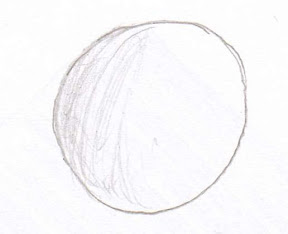 A couple of days later, Joanne’s sister contacted her to say she had seen the same thing, and watched it stationary in the sky for about 5 minutes. She suggested it could have been a satellite with sunlight glinting off it.

Due to the distance of the object it is very hard to find a valid explanation for the objects seen. It is very unlikely to have been a satellite as these move in orbit across the sky continuously. Also it is highly unusual to see them in daylight hours, they are usually seen after dark and appear like moving stars. Were the objects seen by Joanne and later by her sister the same thing? If they were different, then could Joanne have seen an aircraft catching the sunlight at a high altitude? It may have appeared to be stationary at a distance until it got close enough to see movement. However Joanne says she had a clear enough veiw of the object and it certainly wasn’t an aircraft. The object her sister saw appeared to remain stationary for up to 5 minutes, so it is unlikely this was an aircraft. For now these two sightings will remain inconclusive.

At some point in early 2008, Joanne travelled down to London on a coach with friends to see a show. On the return journey she had a sighting of a number of UFOs. The coach was about 45 minutes away from London, travelling along the motorway through the countryside. It was late and was getting dark. Joanne peered out of the coach window at the passing fields. Suddenly she noticed what looked like a number of glowing orange orbs which were travelling along after each other in a rough line. They were quite low down, she estimates about 200 foot. She got the attention of her friends on the coach and a number of them watched the objects for a minute or so until they were out of sight due to the coach moving away from their position.

It is highly probable that this sighting was of a number of Chinese lanterns that had been launched. These appear as orange orbs of light, and often tend to drift in lines as they all head in the direction of the wind. The objects performed no manouveres that would have suggested they were under intelligent control. Joanne accepts this is probably the explanation for the objects, however she is puzzled why they were seen so far out in the countryside away from any towns/buildings. As she has no idea of the precice location of the sighting, and because it occurred so long ago, we have no way of checking to see if others saw the lights, or if an explanation for them was found.