In mid 2014 BUFOG member David Gooding got in touch with me via E-Mail. He informed me of a fascinating UFO he had witnessed back in 1972 when he was only 14 years old. This sighting forever changed his perspective on the UFO subject.

Back in April 1972 David used to have a morning paper round. It was a bright, cloudless, clear morning at around 7.00am with an estimated optimum visibility of around 15 miles. Due to the time of morning there was nobody else around. In order to save himself time on his round he took a short cut across the local rugby pitch which lay between Walstead Road and Cypress Road. The pitch still exists today but is now a football pitch.

Aerial map of the pitch showing the approximate sighting location: 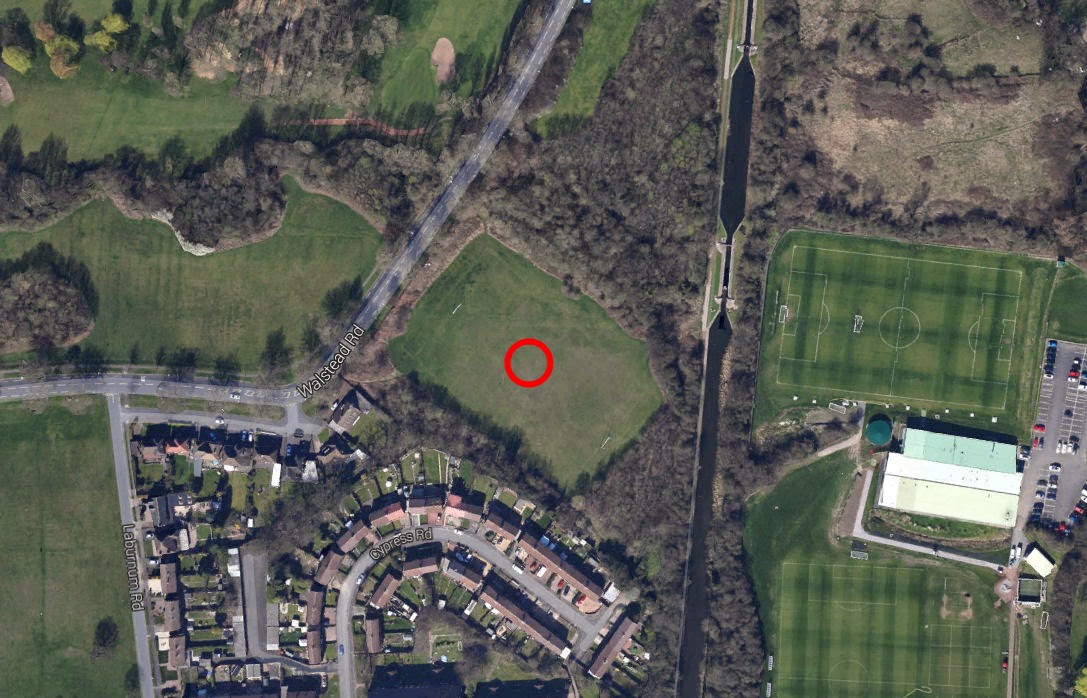 Modern photograph of the pitch: 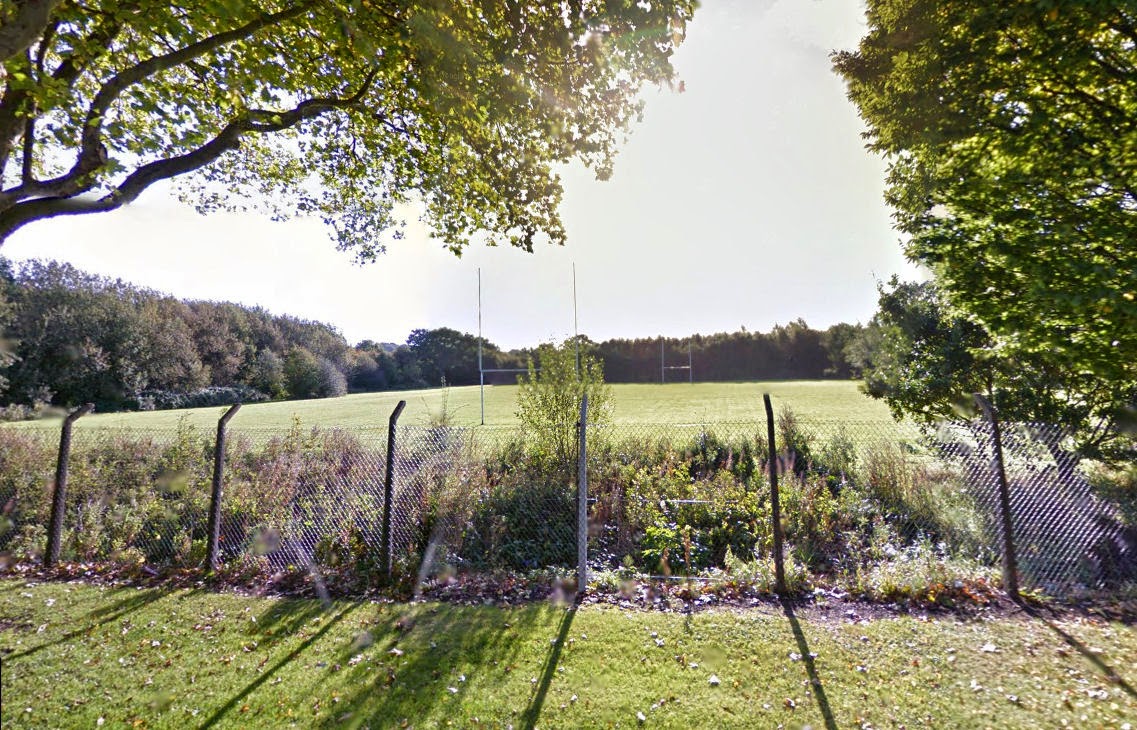 David was around the mid-point of the pitch when he suddenly heard from above and behind him a loud noise akin to the sound of ripping paper. He was startled by this and looked up to determine the source. To his amazement, around 10 metres above his head was a stationary circular object, approximately 10 metres in diameter. It had a phosphorescent underside exhibiting multiple shades of electric blue which swirled around in a similar was to smoke caught in a laser beam. The object made absolutely no noise and was completely still. There were no other notable effects e.g. no sensation of ionisation.

As his view was entirely from underneath, David had no idea of the side profile of the object. He says it was hard to estimate exactly how long this situation persisted, but he thinks he looked at it for around 8 seconds. Then without warning the object massively accelerated until it was at the observable horizon (20Km away) two seconds later. This would make its average speed around 10Km/s (22,000 mph).

Shaken and gob smacked by the experience, David ran home and incoherently blurted out what had happened to his parents who, though consoling, were clearly very sceptical. Friends he later told were equally unconvinced.

However two day later the local morning newspaper published an article about the UFO, which it turned out had been seen by several other witnesses. One in particular was a very experienced mariner who had witnessed a whole range of meteorological/astronomical events at sea but who had “never seen anything like this”. His observation had occurred at the same time as David’s, from a vantage point at Great Barr, approximately 1.5 miles from the location of David’s sighting.

Aerial map showing the location of David’s sighting (A) and Great Barr (B): 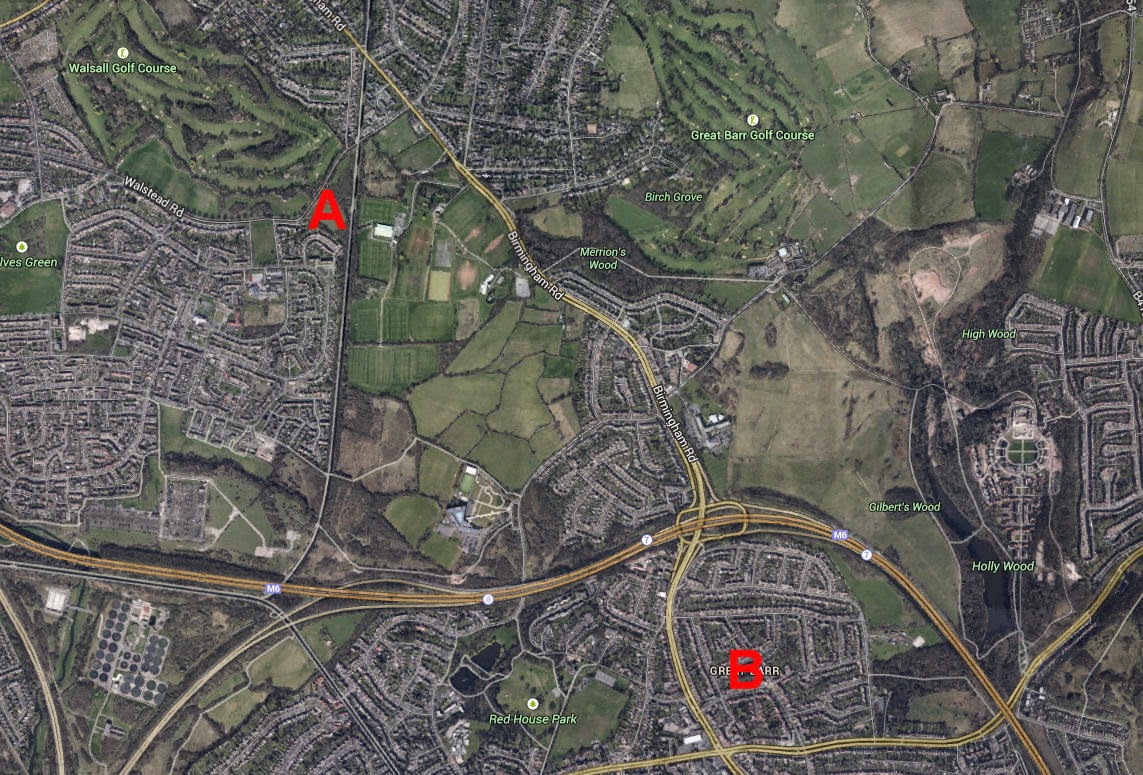 This is an incredible and well documented account of a disc-shaped UFO. Unfortunately due to how long ago the sighting took place we have not managed to locate the newspaper report. However I have no doubt that the witness is talking about a real event. Many aspects of the sighting point to the fact that this was a highly unconventional object.

The fact that the UFO was seen by other witnesses at different locations to his means that it could not have been a product of David’s imagination and was clearly a physical object in the air. It was clearly not a normal aircraft or helicopter, and the stunning manoeuvre which it performed completely puts out of the question the idea that it was some kind of inflatable object such as a reflective balloon or blimp, or a remote controlled model of some kind. I certainly feel that this is a genuine sighting of an advanced craft of probable extra-terrestrial origin.

There are some very interesting aspects to this sighting which are not commonly reported. The electric blue underside of the object which appeared to be swirling like smoke is indicative of some kind of field being generated around it, probably involved in its propulsion. There have been other cases where similar energy fields have been observed, although many cases where no such observation has been reported. It is also unusual that there was any sound coming from the object. In the majority of cases UFOs are either completely silent or emit a low humming noise. It is likely that this ripping sound was directly linked with the apparent energy around the object.

The fact that one of the sightings reported in the paper took place only 1.5 miles away at the same time means it is very likely to be of the same object viewed from a different angle and distance. This adds a lot of weight to the case, despite the fact that at present we only have David’s testimony to go on.

In recent years David has visited the library on numerous occassions to perform extensive searches of the newspapers around the time of the incident in a desperate attempt to track down the article. Unfortunately this has so far proved un-successful, but his dedication is further evidence of the reality of his encounter.

Due to the various factors involved I am convinced that this was a genuine craft sighting. I would like to thank David for coming forward with the details of this stunning case.