Nadimah DePrizio lives in Canalbanagh, Northern Ireland. It is a rural area covered in farm land. On the evening of Halloween 2010, Nadimah was walking her pet goat to his field along Carnalbanagh Road, accompanied by an older farmer named Charley Wright. It was between 8-10pm, and a clear evening with the stars visible and a slight breeze. 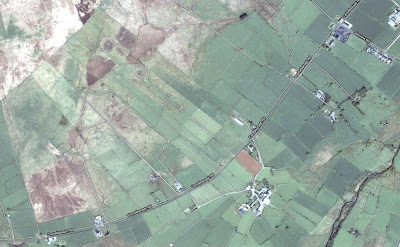 They suddenly noticed an orange orb of light off to the right of the road in the sky to the West of their location. It was shining very brightly, and this glow was constant. It was at least 50 feet in the air. It appeared to be quite small, perhaps only a few feet across.

Photograph looking down Carnalbanagh Road. The object was seen in the sky to the right: 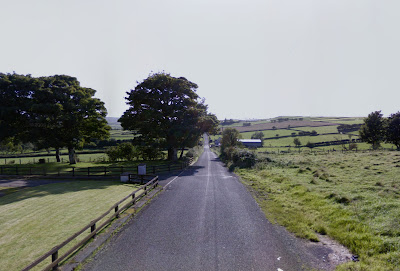 The object was moving slowly towards their location heading in an Easterly direction. It moved on a straight level course without changing speed at all. As it approached, Nadimah and Charley continued along the road. Within a few minutes it was almost directly overhead. They briefly looked down to avoid stepping in a puddle. When they looked back up the object had completely vanished.

Nadimah feels that the object was not a Chinese lantern. She has seen both lanterns and LED balloons before after dark and says that this seemed brighter, and was not flickering at all. It actually got quite close to them and she says that if it were a lantern they would have been able to make out the shape clearly but they could not.

However I am not so sure. The fact that the object was seen on Halloween, one of the most popular days of the year for Chinese lanterns, cannot be overlooked. I saw several lanterns myself on the same night, they are commonly launched from celebrations. Nothing that has been mentioned really suggests that the object could not have been a lantern. It was quite small in size and was moving slowly on a straight course, this is what lanterns tend to do when caught in an air current. It was not flickering, however sometimes lanterns can appear continuously bright. When the object suddenly vanished without trace this could easily have been due to the flame inside it burning out. I believe that taking the evidence into consideration, a lantern seems like the most likely explanation for what was seen.