On 30th June 2009, BUFOG was contacted by a police officer from Atherstone, Warwickshire. He wished to report a sighting of a UFO that he had on 31st May. On that day, he had gone to Leicester to pick something up. It was around 9.15pm and he was on his return journey on the M69 motorway. It was a clear evening and due to the time of year there was still daylight. He suddenly became aware of a very bright white light shining to his right hand side. The light was about 2000-3000 feet in the air, and had two smaller objects near to it. He could not identify the objects, but at first thought the main light could have been the landing light of an aircraft, but he looked again and could not see any wings or anything else which would have identified it. As he briefly watched the object from his car, it suddenly vanished into thin air!

A short time later the main light appeared again but the smaller objects were no longer visible. He exited the M69 and parked at a pub car park with the object still in sight. It was slowly moving across the sky in front of him. He tried taking a photograph of it on his mobile phone which sadly did not come out. The object flew over the roof of the pub out of sight. 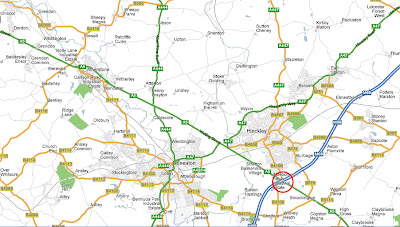 The witness drove further down the road and waited for the object to reappear again, which it did, and now the smaller objects were also visible again. He tried taking another couple of photographs on his phone. All three objects once again suddenly vanished without trace, and this time did not reappear.

Once he arrived home, the witness scanned the photographs into his computer but sadly none of them showed the objects. He is convinced that what he saw that evening was not an aircraft. The main light was very intense indeed, and he has seen aeroplanes with their landing lights on before and their wings and wheels are always visible.

This is a very impressive sighting from a highly credible source. Being a police officer, the witness would certainly be used to seeing various types of aircraft while out on patrol. The fact that he saw the objects vanish in front of his eyes on more than one occasion seems to suggest that they were definitely not conventional aircraft, or other mundane objects such as balloons or Chinese lanterns.

Unfortunately the witness did not leave contact information so at the current time there is no further information regarding this sighting. If you or someone you know has possibly also witnessed these objects please get in touch with me.