In the early hours of 30th December 2008, Steve Reece went to the front door of his house on Kitchener Road, Selly Oak, for a cigarette. It was approximately 12.15am and a cloudy but still night. It was very peaceful outside and nobody else was around. 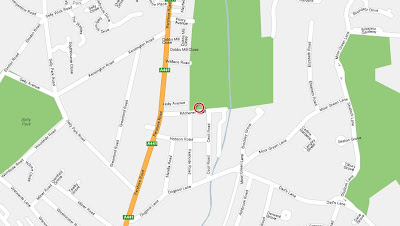 Looking into the sky above the row of houses on the opposite side of the road, he noticed a redish-orange glowing light in the sky. It was moving slowly in a North Western direction towards him. He estimated the light was 200-300 foot high underneath the clouds. At first he thought it was either an aeroplane or police helicopter. However he is an aircraft enthusiast, and soon realised it couldn’t possibly be either of these. He ran inside to first get his glasses, and then went back inside a second time to get his mobile phone. Back on the doorstep he attempted to take a photograph of the object but it was obscured by the nearby street light. About half a minute later a second identical object appeared, following the first on precisely the same path. The two glowing lights approached, getting more intense all the time due to their proximity. He noticed that they were completely silent, but could make out no solid objects behind the lights. As they got close to his road, their course deviated slightly but continued across the sky in front of him. The first light then faded out, and once the second had reached the location where the first had been it too vanished without trace.

About 30 seconds later he saw two other lights moving together close to where he had first sighted the initial ones. They were heading on a different trajectory to the others in a western direction, and were also moving a bit faster. They appeared to be lower down in the sky, one above and slightly ahead of the other one. As they approached he lost sight of one of the lights behind the housing due to it’s lower height. The other was still visible and moved across the sky above the houses and then faded out as the other two had. He assumed the same thing had happened to the lower light also.

View from sighting location in direction objects came from: 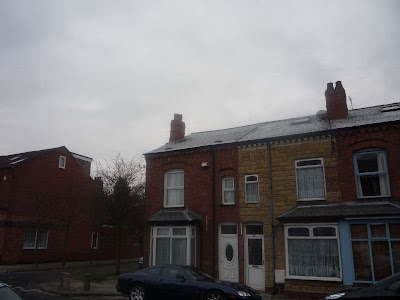 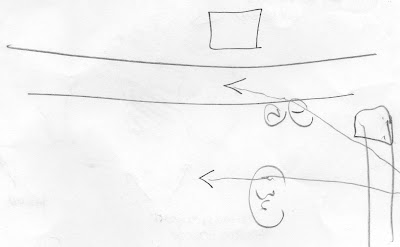 Once the lights had faded he continued to listen for any sounds but there was nothing. Due to his interest in aircraft, Steve is on the mailing list of the local airport. However the airport reported no unusual activity that night which would have accounted for the lights seen.

It is possible that the lights seen were Chinese Lanterns drifting in the sky. They could have burned out near to his road which would account for how they vanished one by one. However there are numerous facts that point away from this theory. Steve mentioned that it was a very still night. It would have required quite a strong wind to blow the objects in very similar trajectories across the sky. Lanterns tend to drift more randomly, the lights the witness saw looked like they were powered and on a set course. Also lanterns tend to flicker but Steve insists that the lights he saw did not do this, they were very bright and intense. There are no reports of anyone lighting lanterns in the nearby area. Also nobody else has come forward claiming to have seen the objects, but this could be due to the time of night that they were observed.

It is unlikely the lights were aircraft or helicopters due to their appearance and the fact they were completely silent. Also the lights would not have suddenly faded out, they would have remained visible. Radio controlled objects are also unlikely for the same reasons. Meteorites can of course be discounted because of the slow speed the objects were moving at, the fact they were on similar trajectories and also the objects deviated course before finally vanishing.

Unless someone comes forward to claim responsibility for them, the true origin of the lights seen over Selly Oak towards the end of 2008 may well remain a mystery.