BUFOG’s own chairman Craig Lowe had an interesting UFO sighting while out driving in Quinton on the evening of 30th January 2009. While no physical craft shape could be seen, the movements the object performed as well as other aspects of the sighting seem to suggest it was something unusual.

It was about 8.10pm, and was a clear evening. Due to the time of year it was of course completely dark. Craig was driving along Ridge Acre Road in Quinton towards Harbourne. He reached a junction and stopped at the lights. Looking around, he noticed a bright orange light in the sky above a nearby chip shop. 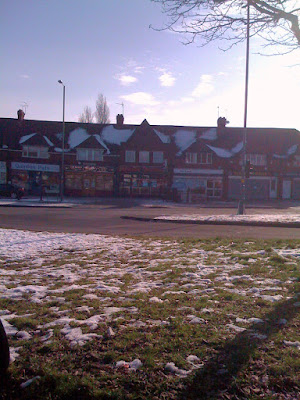 It was to the South and appeared to be less than a mile from his position. Craig estimates it was between 800-1200 feet high. The light was travelling towards him at a speed of at least 300 mph. Craig then spotted an aeroplane coming from the west. It was heading towards the object but around 200 foot lower in the sky. He watched for several minutes as the plane approached the object. He had the window wound down and could hear the plane but could not hear any sound. The lights changed several times but there was no traffic behind him, so he continued to watch. As the plane got very close to the object’s position suddenly the orange light went off, but Craig could still make out a faint reddish glow from the object. It then moved up in the sky to a higher point as if to let the plane cross its flight path. Once it had past, the object moved back down again to the level of the plane and then not only increased in brightness again to how it had been before, but also appeared to actually increase in physical size. It then dramatically increased in speed to around 450 mph and flew off to the West. There were now cars behind him so he could not keep watching the object and was forced to continue his journey. 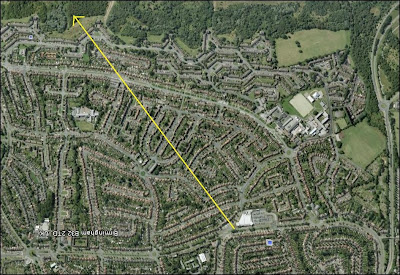 1: Object and aeroplane as they first appeared 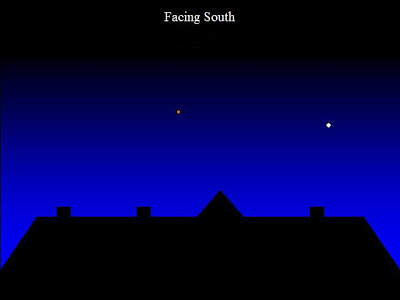 2: Object getting brighter/closer as plane approaches 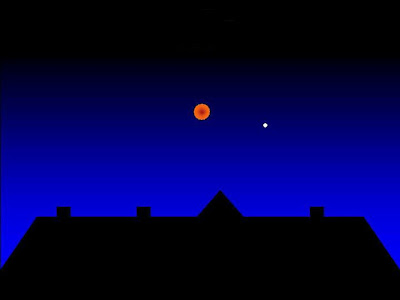