Ann and Arthur Deans currently live in Sutherland and often enjoy exploring the roads of Scotland in their campervan. Towards the end of 2008 they were parked alongside the loch known as Lochindorb in the Highlands when they had an unusual experience during which an unidentifiable sound was heard numerous times, a sound that they believe may have come from a UFO.

It was late evening on the 29th December 2008. Ann , Arthur and their son were out in the campervan and had decided to stop for the night in a small parking area alongside the loch. The parking area is sheltered on three sides, with the loch to the West, and moorland across the other side of the road to the East. There are no campsites anywhere nearby so they were completely alone. There is a lodge but it is about 2km further down the loch to the south. It is quite a desolate area, especially in winter time, and there were no other people around or other cars on the road. As it is so peaceful it is easy to hear the sound of other vehicles approaching.

Map showing the location of the parking area alongside the loch: 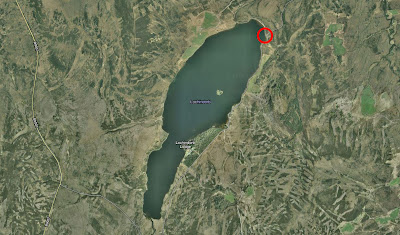 Photograph of the parking area: 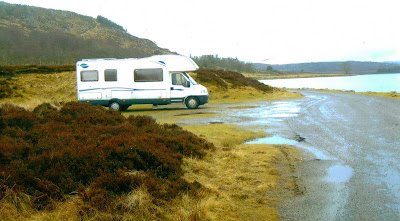 The view of Lochindorb from the parking area: 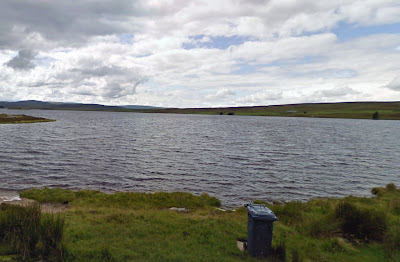 It was a calm, still night but was quite cold and frosty. Ann and Arthur were staying up late to work on a cryptic crossword, while their son slept alongside them. It was about midnight when Ann first realised something was amiss. She suddenly heard the flapping wings of a flock of birds in the distance over the moor to the East. Their behaviour seemed unusual like they had been suddenly disturbed by something. This immediately made her feel uneasy. Ann later found out that Arthur did not notice the sound of the birds. It is possible he was too engrossed in what they were doing to take notice.

The view of the moorland from the parking area: 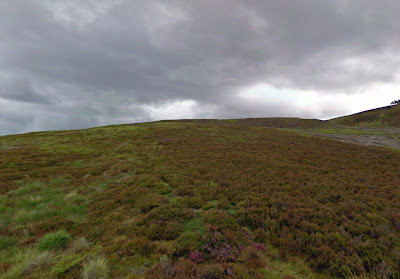 A short while after this, the couple heard the strange noise for the first time. It sounded like a whirring sound with a rhythmic pulsing to it. It appeared to be coming from 50-100 yards away from the campervan out over the moorland, possibly up in the air. Ann says the sound reminded her of the noise made by a children’s toy known as a Howling Tube. It is a long plastic corrugated tube which makes a noise when it is swung round in circles. But this definitely wasn’t the cause of what they were hearing, as it was much louder, and there would have been no reason at all for someone to have been standing out on the moor with one of these in the middle of the night. At the same time as the whirring sound, Ann heard the noise of an animal of some kind growling in distress from the same direction. As with the birds, Arthur did not seem to notice this, though he certainly heard the unrecognisable sound. It continued for between 15-30 seconds and then suddenly stopped.

Ann was already on edge because of the flock of birds, and as soon as she heard the strange sound she became very worried indeed. She immediately asked Arthur “Did you hear that? Did you hear that?” to which he responded that he had. Ann was frightened by the sound as it did not sound like a known aircraft or vehicle of any kind. It felt completely out of place given the situation.

After a couple of minutes the noise began again. It seemed to last for about the same length of time and again seemed to be over the moor. Ann felt they were in danger of some kind and she was extremely alert to the sound. Usually she and Arthur would investigate any strange noises heard, this would of course be the logical thing to do. But on this occasion Ann felt instinctively that they should not try to engage with it in any way, not even by looking out of the campervan windows. She specifically asked Arthur not to do this and he complied with her wishes.

Over the next 30-45 minutes the couple heard the noise several more times. The time between it occurring varied and seemed to have no pattern to it, but each time it would generally last for about the same number of seconds before falling silent again. Then suddenly without warning the noise started again, but this time was much louder and closer to the campervan, perhaps even directly overhead! Ann was absolutely terrified and sensed that something very bad was going to happen. But once again the noise ceased.

Ann was extremely unhappy about the situation so after 15-30 minutes (during which the sound was not heard), the couple decided to leave the area. They drove to a lay-by on the outskirts of Grantown-On-Spey. The rest of the night passed without incident.

Map showing the location of the Lochindorb parking area (A) and outskirts of Grantown-on-Spey (B): 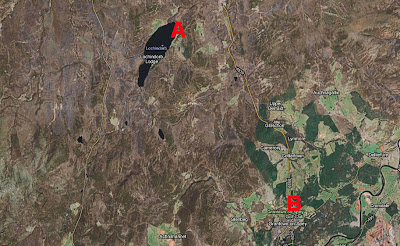 Soon after their experience, the couple bought a local newspaper known as the Strathspey & Badenoch Herald. It featured an article reporting that another man had seen an unexplained orange light in the sky over the same area of Scotland on the same night at 10pm. Other than the rough location there is nothing really to link the sighting to their own, the witness did not report it making similar sounds to what they had heard, but in February 2009 they decided to write into the newspaper with their story. A month later they wrote a follow up letter in response to a sceptical letter someone had sent in.

Fright night by the loch

Sir, – We are writing to you regarding your recent reports in the "Strathspey and Badenoch Herald" on UFO sightings.

On the night of December 29 we were at Lochindorb in our campervan. We fled in the early hours of the morning due to strange noises that we found disturbing.

It was a calm, frosty night with no wind but we could clearly hear something moving through the air. Sometimes the noise was close by and at other times it was more distant. The noise was not continuous and made a whirring/whistling sound. It did not sound like any bird, plane or helicopter.

Each time the noise occurred, the birds would go crazy and an animal nearby also sounded disturbed. It was making a growling sound.

Although the noises were brief and happened over about an hour, it was enough to unsettle us. We have visited Lochindorb many times in the past and we have visited since. But we have never experienced strange noises like that night. It was eerie.

Whilst we were at Lochindorb we were not aware of vehicles or people being around at that particular time. When my husband drove off, he saw nothing that could account for the noises. Whatever it was, it was totally alien to the environment and it frightened me.

We felt it was important to relate our experience after reading about others. We cannot rationally explain the noises.

Sir, - With reference to "Fright Night at Lochindorb" we visited the loch with friends on January 2 to find it frozen over.

It was late afternoon on a beautifully sunny day, clear sky, very cold with no wind, and when we stopped to take photographs the silence was broken by a strange low murmuring, almost howling noise which was very difficult to describe. It was quite eerie even in broad daylight.

I am sure that there is a scientific explanation. Something to do with large expanse of ice vibrating slightly due to the air trapped between the water surface and the ice thereby creating a loudspeaker effect.

There are a few references to ice murmuring on the web, with recorded sounds, but I have yet to find a clear explanation. I have an open mind on the subject but there were definately no UFOs in view! - Yours etc,

Sir, - Re the recent correspondance in the Strathy on 'Noises at Lochindorb' - just Google (or whatever search engine you prefer) "lake ice noises". This produces many pages including some with video and sound from several North American lakes. - Yours etc,

Perhaps it's "Close Encounters of the Closed Mind" for some

Sir, - In reply to Mr Murray's letter "UFOs? Don't think so" (February 11), we have been to Lochindorb on a number of occasions when the loch was frozen and breaking up. The noises from the ice were very eerie and almost musical.

But we would like to state that the noises we heard came from the sky and not the loch. This was clearly a different noise altogether from what we have heard at the loch.

We would also be the first people to look for a rational and logical answer to all that has been reported in the "Strathy" recently.

Although Mr Murray did not encounter UFOs on his visit to Lochindorb on January 2 that proves nothing. Open minded - I think not. More a case of "Close Encounters of the Closed Mind". Yours etc,

The repeating sound that the couple heard was very unusual indeed, especially considering the remoteness of the area and the time of night that it occurred. There was nobody else around and it was a cold night so it is unlikely there was someone out there engaging in some unusual activity which could have caused the sounds. It could not have been an aircraft such as a helicopter or microlite as if this were the case the noise would have not stopped and started at random, it would have been continuous. The description of the noise does not sound anything like a jet afterburner firing so I doubt that this was the cause either.

The fact that the sound suddenly appeared much closer and up in the air outside the campervan, and was not just in a single location, tends to rule out the idea that it was some unusual construction or farm machinery. It was the middle of the night, so it is very unlikely that any machinery would have been in use in the first place. It was a still night, so the sounds could not have been caused by something being caught in sudden gusts of wind.

Ann’s reaction to the sounds may seem unusual to some, but considering the fact that the family were out there on their own with no-one else around to aid them in any way, they are certainly justified. Arthur was less frightened by the sounds but respected Ann’s wishes and did not try to discover what their source were.

It appears that whoever wrote the response letter to Ann and Arthur’s initial letter suggested that the noises could have been caused by ice cracking on the loch. As you can see from the couple’s reply they had actually experienced this on numerous occasions and so knew exactly what this sounded like. Also the noises were coming from the moorland side of the campervan not the loch, so this explanation can also be ruled out.

It is certainly a possibility that the noises were coming from a UFO, although the couple had no visual confirmation of this at any point. However if this was the case then this could explain why nearby animals appeared so agitated, and also why the couple have not experienced the sounds either before or since the incident.

If you know of anyone who could shed some light on what the sounds may have been please get in touch.