As you may well be aware, sightings of orange orbs/lights are reported regularly all around the UK. Many of these turn out to be nothing more than Chinese lanterns – large paper lanterns that are lit from inside and drift up into the night sky for up to 45 minutes. However, occasionally these sightings contain interesting aspects, which perhaps point to a less mundane explanation. This could be the case with this incident, which occurred on 29th May 2010 in Bletchley, Milton Keynes.

At 9.45pm, witness Scott Humphries was on his way back home from a late evening shop at Tesco’s. It was fully dark, with partial cloud cover. Scott could make out stars in the gaps between the clouds, but the moon was not visible. There was a light breeze blowing in a Westerly direction. As he was driving along Manor Road, he suddenly noticed three orange orbs of light in the sky ahead and to the left of his car. They were a deep orange colour and were brighter than the streetlights. They looked almost like rings, glowing orange but with a darker centre. The 3 lights were arranged in a straight line from each other. Scott estimates they were about 1500-2000 feet high and were each about the size of a car. They appeared to be moving at a slow speed.

Diagram showing the formation of the UFOs at the start of the sighting: 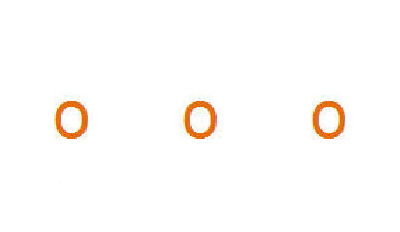 Scott at first thought that they must be helicopters. He had both seen and launched lanterns before, and felt that these lights were something else entirely. He reached the roundabout between Manor Road and Stoke Road. The lights were now almost directly overhead, just slightly to the South East of his position. He decided to pull into a lay-by and get out to get a better view of them. Two other cars also pulled up to watch what was taking place.

Aerial map showing the location of the lay-by on Stoke Road: 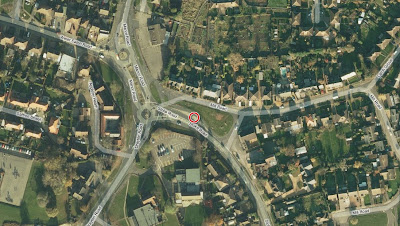 Photograph of the Stoke Road lay-by: 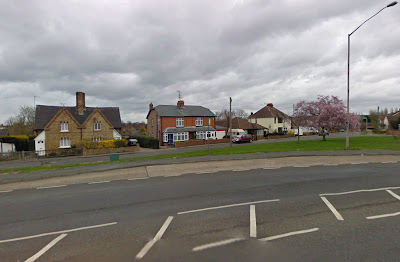 By this time the 3 lights had re-arranged into a triangular shape, and were now completely stationary.

Diagram showing the new formation of the UFOs: 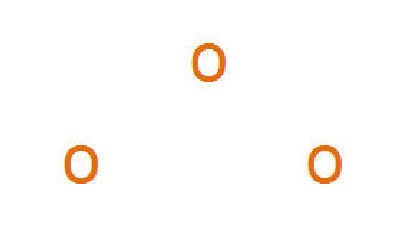 Then from the West came 3 more lights, again in a completely straight line. They appeared to be moving at a fast speed, equivalent to that of a plane. As they approached they appeared to be at the same altitude as the initial 3 lights. After about 20 seconds they had got quite close and suddenly increased in altitude and seemed to position themselves in an identical triangular pattern above the other 3 lights.

Photograph from near the Stoke Road lay-by in the direction which the second set of objects came from: 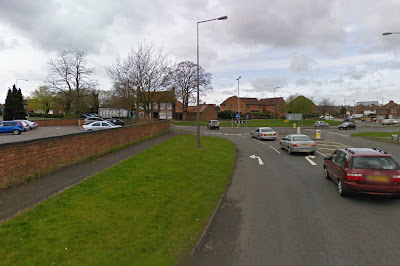 After a number of seconds, without warning the upper triangle of lights suddenly began moving off to the East at a fast constant speed in the direction of Brickhill Woods. All 3 lights began moving at the same time and held the same position to one another. Scott believes that they reached a speed of up to 750mph. A couple of seconds later, the initial group of 3 lights also began moving away in the same direction, again maintaining their positioning. After about 10 seconds, just before they reached the woods, all 6 lights made a right angle turn and rose straight upwards into the clouds.

Photograph from near the Stoke Road lay-by in the direction the UFOs headed off in: 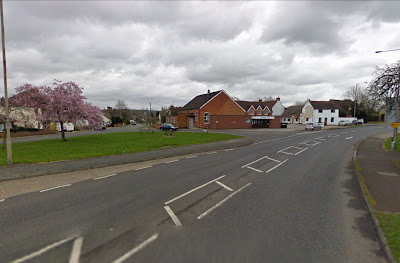 In total the sighting lasted for a few minutes. Scott was amazed by what he had just seen. He did not talk to the 3 other people who had also stopped, and instead continued his journey home. He felt a little frightened by what had taken place.

Obviously the movement pattern of the objects seen in this sighting is the most important aspect, and what point towards them being something other than just lanterns. The way that the objects seem to arrange themselves into symmetrical triangles and straight lines is interesting. Also the fact that some of the objects remained stationary while others approached at speed, before all six moved away seems unnatural. They appeared to be moving against the direction of the wind, and there is also the right angle turn towards the end of the sighting to consider.

However I do wonder if these apparent intelligent manouvres were just caused by unusual air currents. Perhaps the objects were lower and therefore slower and smaller than they appeared to be. In the sky there is no point of reference so it can be very hard to judge the distance of objects. Perhaps the wind was in a different direction at high altitude than it was at ground level. Multiple lanterns will often arrange themselves into a straight line as they are carried by the wind, so this aspect could be easily explained. As for the triangular formations – perhaps after drifting for a while, the objects entered a pocket of stiller air, which would have given them the opportunity to drift randomly. Could the triangular patterns have just been a coincedence? Obviously the objects would not have appeared in a symmetrical triangular formation if viewed from a different angle. When the lights appeared to move away from the area at the same time, they could possibly have just been caught by a sudden gust of wind. Lanterns naturally drift upwards when not being blown sideways. So perhaps when it looked like they had made a right angle turn and moved up into the clouds, they had really just entered a much stiller area and then had a chance to rise until out of sight.

The lights were certainly not conventional aircraft of any kind, and clearly could not have been meteorites, satellites or earth lights. Taking everything into account, I feel that this sighting can most likely be put down to Chinese lanterns caught in unusual wind conditions. However I still find the movements interesting, along with the fact that the witness had previously seen what lanterns look like, and insists these were something else.