It was between 8.40-9.15pm on the evening of 29th January 2010. Thomas was at the hospital where he works in Letterkenny, Donegal. He was standing outside having a breath of fresh air on a break from his work. It was the night of the full moon and the stars could be seen through gaps in the low partial cloud. It was also quite windy.

Thomas was looking up at the full moon and watching the clouds drift by. Suddenly he saw a strange object come into view over the top of the building alongside him, almost overhead but a bit to the North. It appeared to be a flattened disc shape and was glowing white. Thomas describes it as looking like a “round hole of daylight punched through the night sky”. It appeared to be about 10 metres in diameter. The object was a short distance above the low level cloud layer, and was initially travelling against the wind. Thomas knows this as the clouds were travelling in the opposite direction to it. Also he could see the clouds passing beneath the object so it was clearly solid and not a searchlight hitting the base of the clouds.

Photograph taken at the sighting location looking up at the roof of the building, with the UFO drawn on top by the witness in the position it first appeared: 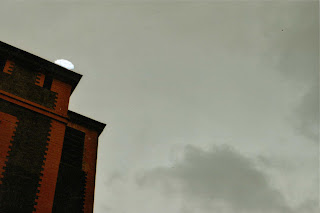 The UFO initially travelled East for about 300 metres. Rich estimates it moved between 70-80 mph. Then it suddenly came to an abrupt halt. After hovering still for a short time it then flashed extremely fast before shining a beam of yellow-white light downward onto the top of a nearby large cloud. The beam lasted for several seconds. It repeated this a few times.

Photograph of the sighting location with the UFO drawn on top in the position it moved to initially: 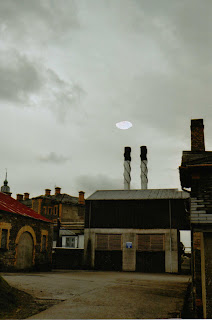 After this astounding display it then moved in the opposite direction back towards his location. Again it stopped, flashed, and shone the beam downwards onto the clouds several times. Over the next 15-20 minutes it repeated this entire sequence five or six times. It appeared to be searching for something or scanning the clouds.

Photograph of the sighting location with the UFO drawn on top in the various positions that it moved to:

Witness drawing showing the movement pattern of the UFO: 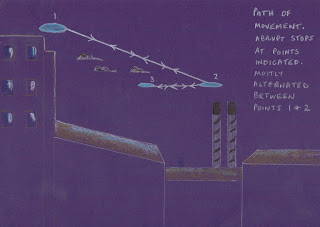 Photograph of the sighting location with the UFO drawn on top in the various positions it moved to: 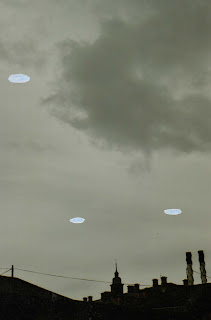 Thomas was amazed and excited by what he was witnessing. At one point he saw the light beam break through a gap in the cloud and continue shining downwards into the sky beneath. 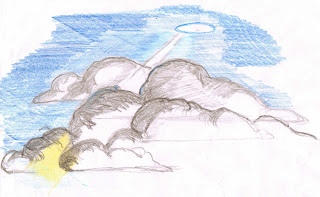 Thomas was aware that the night staff were about to start their shift. After 10 minutes of observing the UFO alone, he went in and found one of the staff named Julia. He asked her to come outside and also see the the object.

Julia returned outside with Thomas and they both then watched the UFO for a further 5 minutes. Unfortunately it was then time for Thomas to hand over work duty to Julia and two other staff Kerry and Veronica. They went back inside to meet up with the others. However when they told them about the object, Kerry and Veronica were intrigued and wanted to see it for themselves.

Thomas first took Kerry outside to watch it for several minutes, then he, Julia and Veronica headed outside again for several minutes. While outside with Veronica, she claimed to have seen a bright beam of light come down from the sky while she was driving towards the hospital.

It was then unfortunately time for Thomas to give the official hand over. He watched the object for a final couple of minutes. Then he headed inside with the night staff to do the hand over. This took about 15-20 minutes. Once it was sorted out he then ran back outside to see if the UFO was still present, but it could no longer be seen.

Sadly he and the other staff did not have cameras or camera phones on them at the time such as they were uniformed for work. Thomas thought about this later on and wished he had been able to video the object so he had some lasting evidence of what took place.

After the incident Thomas got the impression that the other witnesses did not want to talk about it so he never spoke about it with them after that evening. It has played on his mind ever since.

This is an absolutely stunning sighting and almost certainly of something out of the ordinary. The object was clearly under control and making intelligent manoeuvres, performing the same sequence numerous times. The fact that it shone down a beam of light onto the clouds is impressive and shows that as well as being self-luminescent it had its own distinct light or energy sources. It was clearly not a lit inflatable of any kind due to the movements it performed and was under powered control as it flew against the direction of the wind as well as hovered motionless in the sky. As Thomas mentioned, it could not have been a search light or other ground lighting hitting the clouds as he actually saw the low level cloud drifting under the object and temporarily obscure it from view. It was clearly not a conventional aircraft of any kind. Could it have been some kind of secret military craft? This seems very unlikely, military drones are build for stealth, so they would have no reason to build a device that glowed brightly and was clearly visible from the ground. Also for what purpose would they be shining a light beam onto the clouds many times in succession?

I feel there is a good possibility that this was a genuine sighting of an advanced ET craft. UFOs are often seen to glow brightly after dark. This is probably due to the energy field that they project in order to manoeuvre in the atmosphere. We will probably never know the reason why the craft was in the area at that time or why it was shining the beam of light down onto the clouds. Perhaps it was monitoring them in some way or even extracting moisture from them.

Thomas does not believe that the other witnesses who were there that night would want to talk with me about the incident, so at present we only have his excellent testimony to go on. However this is one of the most impressive sightings I have been informed of in quite a while.