I had returned from work at approximately 6.30pm and my girlfriend was in the kitchen preparing our daughters dinner. I greeted my daughter and played with her for approx 25 mins when my girlfriend called me to give our daughter her dinner. I collected her dinner from the kitchen and walked back through to the living room. The strange thing here was that instead of giving my daughter her food I put the dish on the fire place and walked straight outside through the patio doors - this was approx 7.00pm. I immediately looked directly to the eastern horizon where I noticed 3 faint red lights just above the roof tops of the house at the back of my house.

I watched for a few seconds to see if any signature flashes could be seen from the lights which would identify the lights as an aeroplane but there was no flashing at all. As the lights approached I could distinguish a triangular pattern with two lights at the bottom and one above. On the approach I noticed it was blacking out the stars in the sky and I realised it must be a solid object and not three separate objects. I instantly ran inside to collect my camcorder and went back outside to record the object.The object was travelling quite slowly and hadn’t gained much distance in the time I went inside the house. I started to record the object and then realised I needed to report this. I phoned Mark Martin of the Birmingham UFO group as he lives close to me and thought he may be able to see it also. Unfortunately he was not at home but did manage to take my call. I had now been outside for approximately 3 mins and the object was now above me, I called my girlfriend to come and look as she could be a witness. The object was solid black and against the black sky it was not easily located as the red lights were also faint.

I pointed the objects location to my girlfriend who was also shocked when she saw it. I noticed as it passed over us that not only was it blocking out the stars but it actually was blocking out whole constellations. As we stood their watching in amazement I was concentrating my attention on the camcorder display screen, trying to make sure I had the object in focus. I couldn’t actually see the object in the view finder as the sky being black and the object was black my camera wasn’t sensitive enough to differentiate the two. At this point my girlfriend said "They must be able to see it". "Who", I said. "Them in that plane". I looked at the object and noticed a commercial plane was flying underneath the object.

I estimated the plane was flying at its cruising altitude as at arms length the plane was approximately the size of a dot against your thumb and the black triangular object which was above the plane was approximately the size of a Dorito (tortilla crisp) at arms length (This is where the headlines in the newspapers quoted I said it was like a Dorito, where in fact I only used the word Dorito as an adjective to explain the size of the triangle compared to the size of plane) We watched the object pass over us and watched until it disappeared into the horizon, which would have been heading in the Stourbridge direction. The object made no sound at all and travelled extremely slow, we stayed outside after the object has disappeared for approximately another 2 mins, we then heard a loud raw of a jet engine overhead, I was able to distinguish this from a commercial plane as we live in the flight path for Birmingham international airport and commonly hear low flying planes overhead.

I have also attending for many years the air display show of military craft at RAF Cosford, and this sound of plane did sound like a military jet. As soon as I went inside I phoned Steve Poole of UFO Research Midlands and reported the sighting to him. Steve contacted me the following day and informed me a colleague of his had called him 10 mins after I did and they also reported seeing a triangular object close to Redditch. My first thought was that is was a F117 USAF stealth bomber, but I soon came to the conclusion that if this particular type of aircraft was doing a flyover of Birmingham then almost all aeroplane enthusiasts would be aware, surely airspace would be restricted to commercial flights, would this type of aircraft fly over an international airport whilst numerous commercial planes were quite visible in close proximity to it. And finally, I may be wrong but I would have thought that if this type of aircraft was flying over an international city and airport that it wouldn’t be flying solo, at least it would be escorted by other military jets. 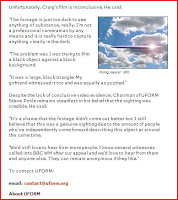 On Friday morning at 6.20am a witness in Walsall reported into a local radio station that whilst walking his dog he saw a large black triangle object flying over him he then noticed two military jets pursued the object. He said he had never seen anything so big. As reported by myself, the footage is inconclusive due to the object does not stand out from the black sky. I recall filming approximately 3 mins of footage but on play back only 33 seconds have been recorded. I must note that on another separate sighting on 3rd November I videoed an unidentified object 4 times, when watching this footage back only 2 recordings worked.

These sightings are still being investigated by BUFOG and UFORM, if you have any further details or witnessed the sighting then please contact us.

You can view the Press coverage here,