Dave Rose from Wombourne, South Staffordshire, has a keen interest in the UFO subject and is a regular on the BUFOG forum. Towards the end of May he had a brief but intriguing sighting of a strange aerial object.

Late morning at 11.20am on 28th May, Dave was walking along the brook towards the Wombourne Common close to his house. The common lies alongside the disused railway line. It was a sunny and clear day, with a few scattered clouds in the sky.

Map showing Wombourne Common and the approximate position the witness was at: 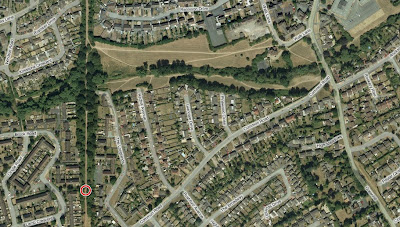 Dave suddenly saw an oblong shaped object glint in the sunlight. It was almost a square, but an extra 1/3 taller than the width. It looked like it was metallic and possibly pale brown in colour. It appeared to be about 400 yards to the North of his position, over the common, and Dave estimates it was about the size of a double decker bus. He believes it was about 150 feet in the air. He only caught a glimpse of the object for a fraction of a second, but it appeared to be travelling at a very fast speed, heading in an Easterly direction. 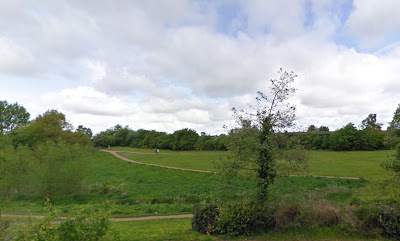 Dave realised that the object could not have been a normal aircraft because of its shape and how low it was to the ground. He continued to look at the sky for several minutes, but the object had vanished. He wondered how it had disappeared so quickly. He had a digital camera in his rucksack at the time, but of course the object vanished much too fast for him to have got a photograph of it.

This is a bizarre sighting and one which is certainly interesting. The odd straight-edged shape of the object certainly points towards it not being a conventional aircraft or helicopter of any type. Also if it was an aircraft, it surely would have been visible for longer. Sometimes aircraft can only be seen when the sun momentarily glints off them, but in this situation the aircraft would be very distant. The object Dave saw appeared much closer to his position.

The object appeared much too large to be a kite/balloon of some kind. And once again if this was the explanation, it would have remained visible.

It is a shame that Dave only caught a brief glimpse of the object, if it had been seen for longer he may have been able to get a clearer view of it or even snap a photo. It is possible that the object was moving at an extremely fast speed and had disappeared from the area almost immediately. Alternatively it could have disappeared via some other means.

Due to the briefness of the sighting, we cannot be certain of what was seen or not seen, but the shape of the object certainly points towards it being something artificial rather than natural.