This UFO sighting occured approximately 10.15pm on the evening of 28th April 2009. It was a clear still night and the stars were visible. The witness, Elaine Skidmore, had been out with a friend and was on her way home in her car. As she drove down Braithewaite Street in Kingswinford where she lives, she noticed a glowing object in the sky off to the left above the houses. She estimates that it would probably have been above High Street when she first spotted it. The object was the shape of an ice-cream lying horizontally and was glowing a constant bright orange. It was a round orb of light with a triangular cone shape coming off it to the left. It was low down in the sky below the cloud layer, about the height a helicopter would fly at. Elaine had no idea of its size but said that it looked quite big as she was viewing it at a distance. The object was moving very slowly to the right on a straight path.

Drawing of the UFO (Drawn by myself from witness description): 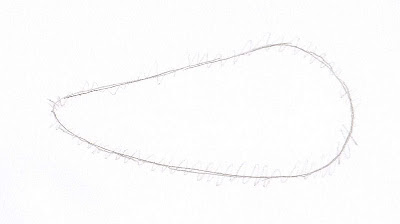 She arrived home and got out of the car to continue watching the object from her drive. It was at this point that she realised it was completely silent. She watched it for over 5 minutes as it passed slowly across the end of the road. Once it had reached the side she was on, it suddenly appeared to stop moving and the cone shape completely vanished. It now looked just like a round orb of orange light. This remained stationary for several minutes and then appeared to slowly get smaller and smaller until it had completely vanished. Elaine waited several more minutes to see if the object would reappear but it did not. 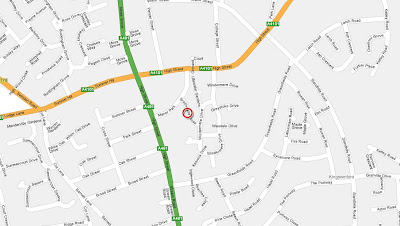 The unusual shape of the object seen in this incident is very interesting. The sighting does have some aspects that fit in with the object being a Chinese lantern. It moved very slow and on a straight path so could well have been drifting in the wind (The witness informed me it was a still night but there could still have been a light breeze higher up). Certainly the colour of the object fits the lantern theory, and when the object got smaller and smaller this could have been it burning out. However usually lanterns are seen just as round orange/white glowing orbs, they do not have other shapes sticking out of them. Elaine insists that the cone shaped part of the object looked solid rather than a trail of light or fire behind it. It is also common for numerous lanterns to be launched together rather than solitary. There is the possibility that it was not a lantern but instead some sort of lit up balloon. Other explanations do not really fit what was witnessed – it is unlikely to have been an aircraft, and was moving much too slowly to be a meteorite or space debris burning up.

Elaine said it was a very quiet night but perhaps someone else also witnessed the object. Due to the distance of the sighting it is hard to say exactly what it was, so at this point it remains unexplained.