BUFOG receives many reports of glowing orange coloured UFOs. Many of these can be easily explained away as either Chinese lanterns or LED balloons. However occasionally there are cases which suggest a much less mundane explanation. This sighting of a UFO over Castle Vale is one such case.

Every evening Marcus Sharp likes to take a walk around his neighbourhood in Castle Vale, Birmingham. On the evening of 27th July 2010 at about 8pm he was out on one such walk. It was a warm and clear evening, and due to the time of year was still quite light in the sky. He was near the middle of the estate by Centre Park when he happened to look up into the sky and noticed a glowing object. It appeared to be above the far side of the estate towards the M6 motorway to the South. 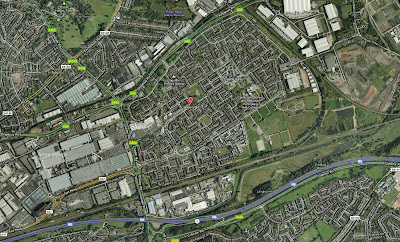 His first thought was that it was an aeroplane with sunlight reflecting off it. But he soon realised it looked nothing like a plane or helicopter and was completely motionless. His next thought was that it was something on fire in the sky. The object was glowing an extremely bright orange and appeared to be oval-shaped, almost like the body of a plane without the wings or tail. Marcus wondered if it was actually metallic and had bright sunlight reflecting off its surface. It looked smaller than a plane in size, but not particularly small either, but this was hard to judge accurately because of the distance. It was also hard to tell the exact height of the object, although it wasn’t at very high altitude.

The sight of the object confused Marcus, and he stood there trying to work out what it could be. It looked nothing like a conventional aircraft. He had also seen Chinese lanterns several times before but this object looked a different shape and also much brighter than these had been.

The UFO hovered completely stationary in the air for about 30 seconds. It was completely silent and the brightness of the light coming from it remained constant. Then all of a sudden it completely vanished. It was as if it had blinked out of existence. Marcus had not taken his eyes off the object, it was just there one moment, gone the next.

Although this sighting does have some similarities with a Chinese lantern or orange coloured LED balloon, I find certain aspects very interesting indeed. It is true that lanterns burn a bright orange colour, however they do tend to usually flicker, and Marcus did watch the object for 30 seconds but observed no flickering. Also the shape of the object appears unusual for a lantern, and Marcus says it looked considerably larger than a lantern. He has seen lanterns before but insists that this object was different. When lanterns suddenly blink out this is actually the flame inside them burning out. However they will then fall back down to the ground. It was still daylight, so surely if this had been the case Marcus would have seen the object fall?

Could the object have been an oval-shaped electronically lit orange LED balloon? This is a possibility, however if the light inside had suddenly been switched off the balloon would almost certainly have still have visible against the clear evening sky. Also both lanterns and LED balloons tend to drift randomly and even in still conditions will slowly gain in altitude, however Marcus observed the object hovering still for 30 seconds before it vanished. It was a clear night so there is no possibility that it was suddenly obscured from view by a cloud.

The object was clearly present in the air, and because it vanished suddenly is very unlikely to have been a model. So could it have been a genuine sighting of a craft, maybe of extraterrestrial origin? Perhaps it was, as Marcus stated, actually metallic and reflecting the evening sunlight, and this is why it appeared so bright. There have been many sightings of oval shaped metallic UFOs all around the world. If it was a genuine craft, this would explain how it was able to hover motionless and also suddenly vanish without trace. I feel that this is certainly a possibility which should be considered, due to the reasons stated above. Marcus does not personally believe in UFOs and feels that it must have had an earthly explanation, however I cannot currently give one to any degree of certainty.