Recently a contact of BUFOG informed us of a multiple witness sighting which occurred towards the end of January 2009 in Stechford.

The sighting took place around 11pm on the 27th January. It was a clear and still night, with the stars and moon visible. The sister of a friend of our contact, and her friend (names undisclosed) were coming back from a local shop and were nearing home on Neston Grove when they first spotted the object. Looking to the North East they could see a reddish-orange sphere of light that appeared to be heading towards them. The object appeared to be quite high up and was apparently completely silent.

Its exact size was hard to judge, but was much larger than a star in the sky. At first the object was stationary, but then it began to move slowly across the sky. As they walked they kept watching the object, and it appeared to follow them. They were amazed by what they were looking at, so immediately went to get our contact’s friend to tell him to come outside so he could also see the UFO. He was on the phone to our contact at the time, but ended the call so he could go and take a look. 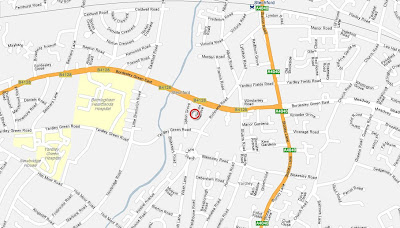 When our contacts friend saw the object it was heading west. It then suddenly stopped for several seconds, before moving away from them in a Northerly direction. They watched it until it had vanished from sight. In total the sighting lasted for approximately ten minutes, of which our contacts friend only saw the final seconds. Sadly no photos or video footage of the object was taken.

Both the girls were distressed by the sighting as they felt that the object was watching them. None of the witnesses have any idea as to what the object could have been. Our contact showed his friend some videos of Chinese Lanterns, but he says this is not what they saw. This is one of the possible explanations I would give for such a sighting, the colour and shape both seem to fit this explanation. However, the fact that the object seemed to stop and start moving at will, and also dramatically change direction suggests it was not a lantern. These usually drift randomly, not perform seemingly intelligent manoeuvres. Perhaps the movement observed was due to changes in wind direction, we cannot rule out this possibility. If it wasn’t a lantern then what else could it have been? It could not have been a helicopter as the lighting colour was different, and also the witnesses would almost certainly have heard the rotor blades, especially as the sighting took place on a clear night. Neither was it an aeroplane, as of course these cannot stop or change direction so quickly. It could possibly have been some sort of radio controlled object, but this seems unlikely. Therefore, this sighting will continue to remain a mystery for now, one with numerous puzzling aspects.