On the first evening of 2010, my friend Miranda Morgan rang me to let me know about two recent UFO sightings she had experienced. While one can probably easily be explained away, the other is harder to explain. This report covers both of these sightings.

It was 5pm on Boxing Day evening. Miranda decided to go and have a cigarette just outside the back door of her property on Roach Close, Chelmsley Wood. It was a very cold evening, but was clear and still, with the stars and moon both visible. 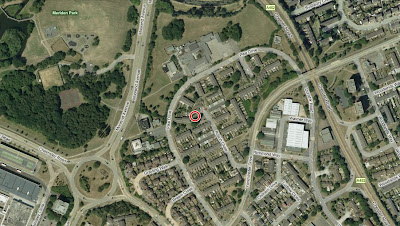 Miranda often likes to glance up at the stars, and did precisely this. When she did she suddenly spotted a very bright blue coloured orb of light. The light was moving extremely fast and heading towards her position from the South West. There was nothing visible other than the light, but Miranda was struck by its colour. It was hard to judge how high it was, but it was definitely not at a low altitude. 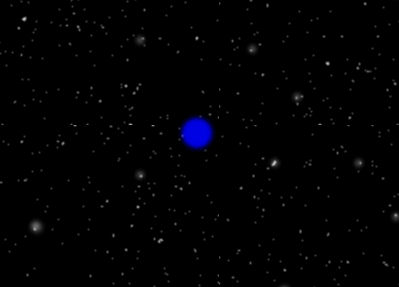 Due to its speed, the orb reached her position in only several seconds. As it passed over her head she turned to watch it continue over the house and onward to the North East. The object was completely silent and Miranda found this very strange. A second after it had passed over the house, it suddenly began to rapidly decrease in speed, before vanishing without trace.

This is an interesting sighting as reports of blue orbs of light are quite rare. It seems unlikely to have been a conventional aircraft or helicopter for a number of reasons. Blue is not one of the standard lights displayed on aircraft, and there were no other lights seen in addition to it. The object was moving too fast to have been an aircraft, and was also completely silent. Also if the light was from an aircraft, why would it have suddenly switched off immediately after a reduction in speed? The witnesses house does lie under a flight path, but this flight path always heads to the South towards Birmingham International airport, where as the light was travelling to the North East towards Coleshill. Perhaps the light was coming from a model that someone was flying, but it seems too fast to have been this, and surely the propulsion system for such a model would have made considerable noise?

Could the object have been a meteorite or space debris burning up in the atmosphere? This is a possibility to consider, and what Miranda’s husband believes it may have been. However, “shooting stars” are usually white-yellow or white-blue in colour, not a rich bright blue. The object appears to have been travelling too slow for this explanation, meteorites are usually only seen for a second as they cross the sky. Also they do not slow down at any point, so assuming this aspect was not an optical illusion it again does not seem to fit what was seen.

For now the source of the blue light remains a mystery. Due to the speed of the object there were probably very few, if any, other witnesses to it.

At 8pm on the evening of new years day, Miranda decided to walk to the shop at the end of Roach Close to purchase some food supplies. It was a still and very cold evening with light cloud cover. While walking back down the road to her house, she looked up into the sky. To the North West she saw a glowing orange orb of light. It appeared to be constant in brightness and was quite visible against the dark sky. It was hard to judge exactly how high the object was or how far from her position.

Miranda continued to watch the orb as she walked down the road. It appeared to be slowing and speeding up in velocity on a path to the North East, and was also slowly ascending. She watched it for about 15 seconds until she reached her front door. By this time the orb had almost vanished out of sight, so she headed inside.

Unlike her previous sighting, this object has many characteristics which match Chinese lanterns, and I believe this is almost certainly what was seen. The apparent changes in speed could easily have been caused by gusts of wind, despite the fact it was still at ground level, at a higher altitude it could have been more breezy. Also the fact that the object was slowly ascending fits in with it being a lantern. At no point did it perform any manoeuvres which would suggest otherwise. Lanterns are extremely popular around Christmas and New Year, and we have received details of numerous sightings which more than likely had lanterns as the explanation. When I informed Miranda, she was satisfied that the object must have been one of these, however the sighting of the blue orb several days previously remains unexplained at present.