Late evening on 26th July 2008, a large glowing UFO was witnessed by multiple groups of individuals. Regarding this incident, the majority of alternative explanations for what the object could have been can be dismissed, making it both an important and impressive sighting. I contacted Simon, one of the witnesses, and arranged to meet up with him for an interview.

Simon and his girlfriend Jane were on their way back home, walking down Dyott Road which runs along the edge of Moseley Golf Club between 10.45-11.15pm. It was a clear night with no wind and very little cloud cover. 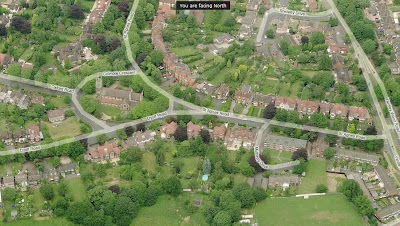 As they came round the gentle curve of the road, Simon noticed a very bright object in the sky in the distance ahead of them. He described it as a very intensely glowing orange ball of light. He estimated the size of the object to be 3-4 times the size of a plane, but it was hard to make out because of it’s brightness. He pointed it out to Jane but at first she didn’t think much of it. The object was moving in a Southerly direction about the same speed as a plane. It appeared to be quite high in the sky at this point. It was a quiet night and the object was totally silent. Simon was puzzled as to what it could be. He observed it for about 30 seconds before looking away to chat to Jane. When he looked back to the sky the object appeared to be much smaller and was also stationary. He assumed it may have changed course and was flying directly away from them at this point, so it may not actually have stopped moving.

Photograph of sighting location in direction object was seen in: 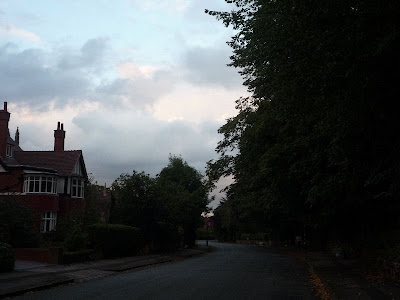 They continued walking along past the local church and into Saint Agnes Road. Suddenly they noticed the object again in the gap between two houses on their right. This time it appeared to be much closer and lower down in the sky. Simon said that the object was totally still in the sky and appeared very large, still glowing a bright orange. He estimated it was 3-4 storeys up. This time due to it’s proximity and the fact it had reappeared much closer to them, Jane took more notice of it. The object remained stationary for around 40 seconds and then started to move very slowly away from them in a South-Easterly direction. As it moved away it seemed to increase in acceleration a bit, but remained on the same straight flight path. It was once again completely silent. This can be verified, as after a couple of minutes they could hear a plane in the distance behind them. Looking back they could clearly make out it’s lighting. After the object moved out of sight, they continued walking to their home further down the street. Looking out of the window they could still make out the object, now further away. They watched it until it disappeared into the distance.

The church on Dyott Road: 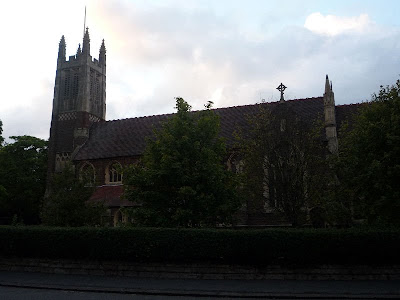 Photograph of second sighting location in the direction the object was seen again in: 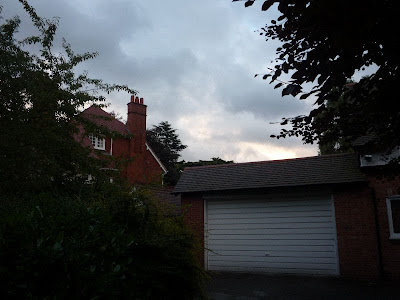 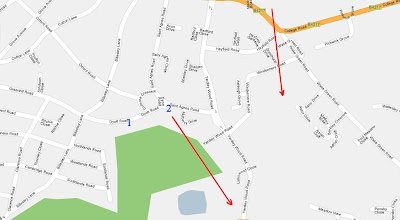 Simon and Jane are not the only witnesses of the incident. A local shopkeeper also saw something, however he was not interested in discussing his sighting with me. Also UFO Info website has had a report entered onto it from three other witnesses, describing a very similar object on the same night at approximately the same time. It is highly likely they witnessed the same event, however unless they provided no contact details so I have not been able to speak with them as yet. The UFO Info report can be found here:

Below is a sketch drawn by Simon, showing how the object looked when him and Jane viewed it for the second time from between two houses in Saint Agnes Road: 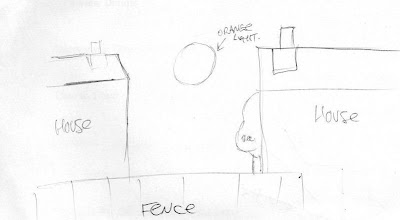 This is such an interesting case as most of the normal mundane explanations can be disproven or taken out of the picture. It is very unlikely the object was a plane due to it’s intense continuous glowing light, apparent size, movement patterns and lack of any sound. This also means that the object was not a meteorite or anything of that nature. It’s movement patterns appeared intelligently controlled. Simon has checked out videos of Chinese lanterns, often the cause of night time UFO sightings. However it is unlikely it was a lantern as first of all it appeared to be really large in size, and also lanterns tend to drift randomly, not hang stationary before moving in a constant direction. Could it have been a hot air balloon of some kind? It’s unlikely as the glowing light was constant not intermittent, and also there was no sound. Another important point to remember is how it changed positions in the sky. At first it seemed far away, and even appeared to be travelling away from the witnesses. But then several minutes later it reappeared much closer and lower down in the sky. There is always the possibility it was two separate objects, however Simon believed it to be the same, it had the same coloured glowing light and comparative size. If it was alien, maybe the object came closer to take a look at it’s observers, who knows?

Simon seems open to the possibility it was an extraterrestrial craft, but is more inclined to believe it was some sort of military project. However if it was military, it seems odd that they would choose to fly it right over the streets of Birmingham. Simon seems completely sincere about what himself and Jane saw that night, and there are also the other witnesses to take into account, so I have no doubt that the incident took place. As with many UFO incidents, it remains a mystery to this day.