There were three witnesses to this particular sighting – Emma, her boyfriend Mark and his ten year old son Stuart (Names changed for privacy reasons). On the weekend of 25th-26th April there was The National Motorhome Show at Peterborough Showground. The witnesses had gone to this show and were staying in their camper van within the grounds. It was 11.30pm on the Saturday, and a clear still night with the stars visible in the sky. Emma and Stuart had just returned to the van, Mark was already inside. She happened to glance up at the sky. It was then that she noticed a round orange glowing orb of light. It appeared to be quite large in size and quite a distance from her, at least a mile away.

It was travelling in a straight path diagonally away from her. It was a very quiet night and there appeared to be no sound coming from the object. She pointed it out to Stuart. They watched it for about ten seconds before she decided to knock on the camper van and get Mark to come and see the object too. He came outside and they continued to watch the orb for a further 20 seconds. It continued moving away from their position and got smaller and smaller until it disappeared into the distance. Nobody else was around in their nearby vicinity, so Emma does not know if anyone else saw the object. 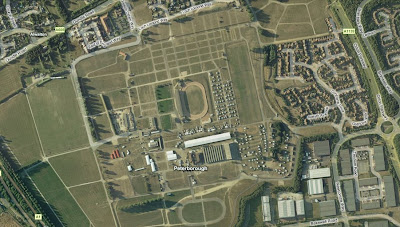 The witnesses were mystified by what they had seen. Once they got home they looked online for an answer. They found various Chinese lantern reports and watched a number of videos of them. However they are adamant that what they saw could not have been a lantern. Emma says that the object looked too large, and was moving too fast to be just drifting in the wind. The witnesses estimate it was moving as fast as an aeroplane which is how it managed to vanish into the distance so fast. It also looked like a solid glowing orb, not just a light, and its brightness remained constant throughout the sighting.

Much like numerous other reported UFOs, details of this sighting are inconclusive. There are certainly aspects which fit in with it being a Chinese lantern – the colour, apparent shape and straight flight path - however from what the witnesses have said it may be something else entirely. The object did not perform any manoeuvres which would indicate it was under intelligent control. There is a possibility that the witnesses were mistaken in the apparent distance, size and speed of the object, and that this was a lantern or lit balloon of some kind. But there is also a chance that it was something far less mundane. Lanterns do tend to be launched in numbers rather than solitary. It was obviously moving far too slow to be a meteorite, and it is unlikely to have been an earth light. I have investigated a number of sightings describing orange orbs before (e.g. Moseley sighting 26/07/08), some of which have aspects which are hard to explain. Could we be seeing evidence of an ongoing unknown presence in our skies?