On the evening of Saturday 24th October, witness Scott Norville had a sighting of two glowing orange UFOs. It was about 8pm and Scott was driving home from Northampton centre. By this time of evening the roads were relatively quiet, though there were a few other cars around. It was an overcast night with full cloud cover, so the stars were not visible at all.

As Scott drove along London Road, he suddenly noticed an orange light in the sky about half a mile from his position to the South West West. He estimated it was about 3000 feet high. He watched the light, expecting it to flash and indicate to him that it was an aircraft or helicopter. He thought to himself that perhaps it was the "Sywell Blades" aerobatic team on their way back to Sywell Aerodrome. However the light appeared to be coming from an individual object and was constantly bright. It looked to be heading in his direction slowly, at about 10 mph. After 20 seconds he decided to pull over and get out to take a better look at the object.

The object continued to head on a straight path towards his position. As it flew overhead, it appeared to be circular in shape and quite large, he estimates it was 20-25 metres across. He also noted that it was completely silent. It continued onward on the same course until it was lost behind some trees. In total he had watched the object for about 3 minutes. Looking back in the direction it had come from, Scott then saw a second object which looked exactly the same. Again it flew on the same path as the first object and passed over his position.

Map showing route of Scott's car, and position and direction of the objects: 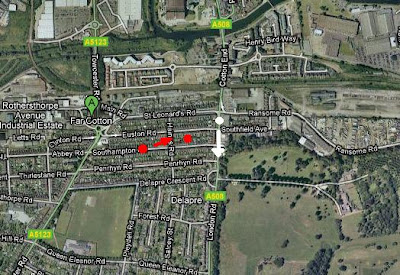 Perspective map showing path of the objects over witness and car: 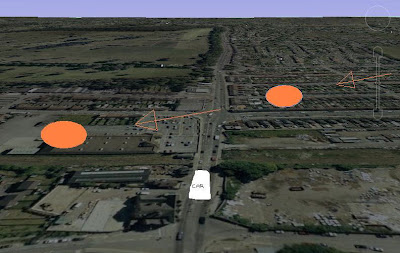 Once the second object had been lost from sight, he got back in his car and continued his journey home. A short while later, he checked the internet and found that there have been a number of similar sightings in the area over recent months.

Scott is interested in aviation. He has been to many air shows and is a member of the Vulcan to the sky club. He is used to seeing aircraft in the sky, but these objects were like nothing he had ever seen before. He says that they looked too large to be Chinese lanterns, and is aware that some sightings of orange lights do turn out to be these.

Other than the apparent size of the objects, they do share many characteristics with lanterns. They were not flickering but sometimes lanterns can appear constantly bright. They moved on the same flight path at a slow speed, were not at a particularly high altitude, and did not perform any manoeuvres which would suggest they were under intelligent control, so may well have been drifting in the direction of the wind. It is possible that the objects appeared bigger than they actually were. It is sometimes hard to judge the size against the night sky as there is no point of reference. Also the brightness of the glow can sometimes make lanterns look a lot larger. Could the witness have mistaken two Chinese lanterns for something much more unusual? It is hard to say for sure, but at this point I feel this is probably what took place. In recent years lanterns have become much more popular and are readily available, and are no doubt responsible for many of the orange orb sightings reported to both BUFOG and other groups or websites.