With some UFO reports it is the movement patterns of the objects seen that are the most impressive aspect. In these cases, many rational or mundane explanations can be easily ruled out, and they can provide fantastic evidence for the presence of something truly extraordinary. This applies to a recent local sighting that took place in Oldbury, south of Birmingham.

The incident took place at 2.15pm on Friday 24th October 2008. The witness, Susan (name changed for privacy) was cooking lunch in her house on Clent Road. She looked out of the window to the east and something caught her attention in the sky. In the distance above the conifer trees at the end of her garden, she could make out what looked like two silver orb shaped objects. It was a clear sunny day with very little cloud, and the objects were reflecting the sun’s rays making them easy to spot. They appeared to be flying slowly towards her. It was hard to judge their size as she could not easily tell how far away the objects were. They were flying quite close to each other and were low in the sky, around the height of a plane coming in to land. The objects were in the direction of Birmingham airport so she at first thought they were planes. But then she thought this was unlikely due to how close they were flying to each other. She watched the objects for about a minute and a half. Suddenly without warning the objects shot away from each other at great speed, one off to the north and one to the south. Within a split second they had completely vanished! She continued to watch the sky for a while but the objects did not reappear. Susan continues to be amazed by what she saw, and currently has no rational explanation for it. 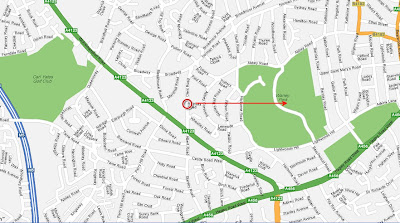 In examining this UFO sighting, most conventional explanations can be disregarded due to the incredible movement patterns observed. Quite often orbs in the sky seen in daylight turn out to be balloons drifting in the wind. However if this were the case it is unlikely they would have shot away from each other, even if caught in a sudden gust of wind. The fact it was a clear still day makes this even less probable. Also, if we assume the objects were just balloons, the only way to explain their sudden disappearance would be that they both burst at exactly the same time, which again is very unlikely. So what else could the objects have been? There is the possibility that the objects were two birds caught in the sunlight. These can appear as shiny orbs until viewed up close. This could explain the movement pattern. When they changed course they may not have been caught in the sun anymore so would appear to have vanished. However this is just a suggestion, and not necessarily what was seen. Most other mundane explanations can be disregarded due to the objects appearance and movement patterns. It seems that Susan is yet another witness to something unusual in the skies over Birmingham.