Late evening on 24th June 2010, Simon Richards and his partner Johanne McAuley had just headed up to bed in their house on Cobham Close, Charford, Bromsgrove. It was a still and clear night with very little cloud in the sky. At about 11.10pm as they were about to settle down to sleep, they heard the sound of a low flying helicopter coming from the North West. This happens every week or so, and because he was still awake Simon got out of bed to take a look and see where it was heading. He looked out of the bedroom window and saw the unmistakeable white, red and blue lights at about 300 feet in the sky. 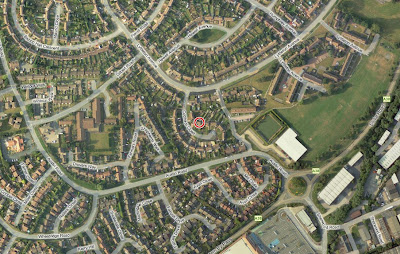 The helicopter went out of sight, so Simon walked through to his son’s bedroom to continue watching it as it moved away from their location. The window in his son’s room was ajar, and he could easily make out the whirring noise of the helicopter. It moved away to the South East. He was just about to put the blinds down on the window and return to bed, when another light in the sky caught his attention. It looked like a single orb of glowing white light. There was no shape distinguishable behind the light. The object was moving at a constant speed and heading towards his location. Simon was puzzled by this light, so after about 20 seconds called Johanne to also take a look at the object. She came to the window, and both witnesses continued to watch the light as it moved closer.

Drawing of UFO based on witness description: 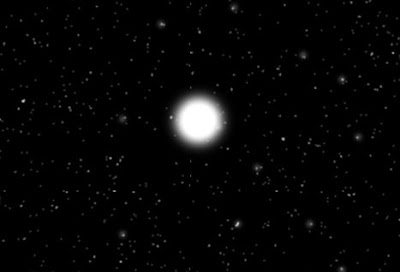 As it got near, it could no longer be seen from the window where they were. Simon decided to run downstairs and out into the back garden to continue observing it. The object was still present and moving away from the area on the same course. It was a quiet night, and there was no sound coming from the object at all. After about 15 seconds it vanished into the distance, or may have been obscured by some cloud. Simon went back inside and briefly discussed the sighting with Johanne. They both agreed it was strange, but then decided to settle down to sleep.

This is an interesting sighting and not one which we can give a conclusive answer to. It seems unlikely the object was a conventional aircraft, these usually have other coloured lights on. Also the object appeared to be completely silent and did not look like it was a very high altitude. Perhaps it was a secret military craft/drone of some kind, but if so it is improbable that they would have flown it right over a populated city. It appeared to be too bright and large to be a satellite, and was moving too slow to be a meteorite. There is a slim chance that it was an earth light, though these do not usually appear over urbanised areas. It is very unlikely to have been ball lightning as the weather was clear.

I feel that the most likely explanation for the object was either a white LED balloon or a Chinese lantern. LED balloons are helium filled balloons that are internally lit electronically. They come in a variety of shapes and sizes, and the larger ones are sometimes even remote controlled. Chinese lanterns are paper lanterns that are lit from within and float up into the sky. At a distance appear as glowing orbs of light. Even though they are usually a fiery orange/yellow colour, they can also occasionally glow pure white. Both LED balloons and Chinese lanterns tend to get caught in air currents and drift across the sky on a straight path, exactly how Simon described.

As with many UFO sightings, there is no definite answer on what the object was, and it shall more than likely remain a mystery.