On the morning of 23rd April 2010, Company Director Carl Theakston was driving back from London to Birmingham, with a passenger named Emily Darby. It was 10.25am and they were between Junction 10 and Junction 11 of the M40 motorway, close to the village of Lighthorne, Warwick. It was a bright sunny day with clear blue skies.

Map showing the approximate location of the sighting: 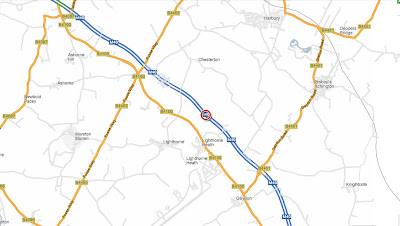 On the left hand side of the motorway, Carl suddenly noticed what looked like five or six cigar-shaped objects in the sky to the North West. They were dull matt brown in colour. They appeared to be about half a mile away and about the size of a large car , but it was hard to judge their distance and so their actual size accurately, they may have been further away and larger. The objects were in a rough spherical formation and appeared to be at quite low altitude, about 200 metres. They were hovering completely still. He asked Emily if she too could see the objects and she verified she could.

Photograph from the section of motorway where the sighting took place: 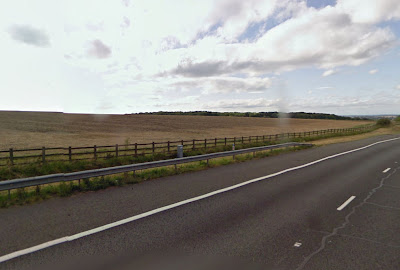 Both witnesses were astonished by what they were looking at. They watched them for 10-15 seconds, then suddenly all the objects completely vanished without trace. The witnesses continued their journey and chatted were both mystified by the incident.

This is an interesting and unusual sighting, and one which may well have been of something out of the ordinary.

Due to the appearance and low altitude of the objects, there is a possibility that they were inflatables or balloons of some kind that were tethered into place. However it seems odd that there would be 5-6 of them. Also if the objects really did suddenly vanish as Carl said they did then this suggests they were something else entirely. The witnesses were sure that the objects really had gone and not just been hidden behind something.

Obviously other explanations for the objects are quite limited. The description sounds nothing like any known conventional aircraft. The proximity of the objects to each other also puts this out of the question. So it remains an intriguing sighting.

I hope to get in touch with the 2nd witness to ask for their opinion of what took place, if I succeed in doing so, this report will be updated.