On 22nd June 2010, BUFOG member Martin Mitchell, his wife and eldest son had a sighting of two UFOs in the area of Wordsley. It was 5.47pm and the three witnesses were in the back garden of their house on Hope Street. It was a sunny and warm evening, with a clear sky, so they had decided to eat outside around the patio table. 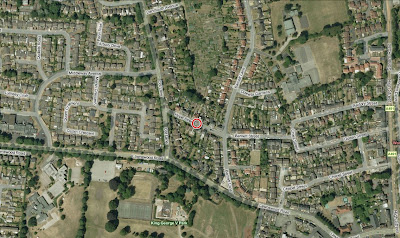 Suddenly Martin noticed two objects in the sky to the North of their position. The objects were spherical in shape and silver in colour. They looked smooth surfaced and were reflecting the sunlight. The objects were quite close to each other, and were positioned diagonally. They looked to be about 3 miles away and were about 500 feet high. They were moving slowly towards his location. Martin estimates they were moving about 30mph but this was hard to judge. He pointed out the objects to his wife and son.

About 30 seconds after first sighting the UFOs, Martin decided to run and get his digital camera to take a photo of them. He went into the house, grabbed the camera and headed back outside. The objects were still approaching slowly. He snapped a photograph of them and then continued to watch with his wife and son. The objects began to arc around in a curve slowly, until they were travelling at 90 degrees to their original direction and moving off to the East towards Hinley/Gormal. After this they then began to slowly ascend in altitude. The witnesses continued to watch until the objects vanished from sight into the distance. In total the sighting lasted for about 5 minutes.

This sighting has some interesting aspects to it. The appearance of the objects and their proximity to one another make it highly unlikely that they were conventional aircraft of any kind.

But could they perhaps of been balloons or inflatables? Both Martin and myself believe that the objects performed manouvres which suggest that they were under control rather than randomly drifting. It was a relatively still evening with only a slight breeze. If they were balloons they would more than likely have ascended throughout the sighting not just towards the end of it. Also I find it unlikely they would have moved round in an arc as they did, and would have just continued on a straight course in the direction of the wind. There is also the fact that the objects appeared to be flying in tandem, and retained the same distance from one another throughout the sighting. Obviously balloons cannot be fully ruled out as an explanation, but the movement patterns exhibited suggest otherwise.

Reports of spherical silver coloured craft have been reported all around the world for many years. Could this incident have been a genuine sighting of two such objects?