At 6.09pm on the evening of 21st December 2009, Cyrus Edwards stepped outside his house on Parc Y Felin, Lampeter to feed his pet ferret. Due to the time of year it was already dark, and was clear and still, with the stars and moon fully visible above. He happened to glance up into the sky and to the South West saw a large number of orange glowing orbs moving towards the North East. He estimates there were between 20-30 of them. They appeared to be about the height of a helicopter. They were moving on a straight course all about the same speed, and slowly increasing in altitude as they went. 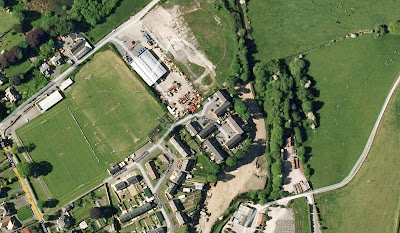 Cyrus called out his wife to see the spectacle. They continued to watch as the group of objects passed overhead. They appeared to have clearly defined edges and were slightly flickering in brightness. The objects appeared to be different sizes, although this could have been down to distances involved. It took about 30-40 seconds for them to vanish to the North East, seeming to turn Northwards a bit before they did so. By this time they appeared to be about the height of a passenger jet.

Looking back to the South West they then noticed several more of the objects. This was followed by another large group of up to 30 orbs, and then a massive group of 60-70 of them. They all moved in the same direction and seemed to fade out to the North East. Cyrus claims that this pattern continued for 53 minutes. Both him and his wife were astounded at the sheer number of the objects which were seen during this time.

It is almost certain that the objects that the witnesses saw were a large number of Chinese lanterns being launched from a nearby celebration. Considering the incident took place 4 days before Christmas, one of the most popular times of year for lanterns, it is very likely that they were launched from a Christmas party being held to the South West of their location.

Cyrus feels that the objects could not have been lanterns because of the sheer number of them. If the objects really did continue drifting over in large groups for an entire hour then indeed this is an excessive number of lanterns, but not out of the question. There are too many similarities with lanterns for the objects to have been anything else. Their appearance, movement pattern, flickering brightness and gradual increase in altitude all point towards them being this. Plus if the objects really were something more unusual there were so many of them that they would have certainly been seen and reported by many other people and the event would have made the local, if not national newspapers.

Whether or not we ever find out which celebration the lanterns were being launched from, I am extremely confident that this is what the objects were.