Many sightings of UFOs that take place after dark are just of anomalous glowing unidentified lights. In such incidents it is hard to say what the object is going on appearance alone, other aspects of the sighting such as movement pattern becomes much more important. In this particular case, the movement of the objects is the most impressive aspect.

It was around 9.00pm on 21st September 2010. Paul, Jason and Jason's two sons had been to Cantebury for the day for football training. They were on their way back to London. Jason was driving the car, and Paul was in the passenger seat. They were driving along the M2 motorway. It was a clear and still night and the stars could be seen overhead. As the car approached the Medway services near Gillingham, Kent, Paul noticed two bright white orbs of light in the sky directly in front of them to the North East East. He watched for a moment before alerting the others in the car to their presence.

Aerial map showing the stretch of motorway along which the sighting took place: 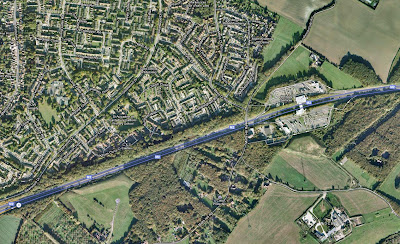 He continued to watch the lights, which were hovering in the sky and slowly moving towards and away from each other. They appeared to be a number of miles away from their location and about 500-600 feet high. Initially Paul thought they must be helicopters.

After about 2 minutes one of the lights suddenly dimmed in brightness and then greatly increased in acceleration and flew away to the North West towards London at an extremely fast speed. It was only visible for several seconds before it had gone out of sight! A few seconds later the remaining object performed the same manoeuvre, but this time flew away to the North towards Essex. Due to the movement observed, Paul was immediately certain that the objects had not been helicopters and must have been something else entirely.

Despite the fact the UFOs were only seen at a distance and no discernable shape could be made out, this is an impressive sighting due to the movement pattern observed. As Paul rightly points out, when the objects left the area they did so at a speed far greater than helicopters could move at. The fact the objects were more or less stationary for up to two minutes before means they cannot have been conventional aircraft either. They obviously moved far too fast to have been something else such as LED balloons or remote controlled models. A natural explanation such as ball lightning is also extremely unlikely in this case.

I feel that due to the movement seen, there is certainly a possibility that this was a sighting of two advanced craft, possibly of extraterrestrial origin. If what was seen was two secret military craft or drones, it is unlikely they would have been flown in such a public location, in full view of anyone driving along the M2 motorway at that time.