This report covers a sighting which took place in the skies over Washington. One of the two witnesses to this incident, named Thomas Pearson, got in touch with me via Richplanet.net.

It was a clear and still evening in 2010. The sky was clear of cloud and the stars could be seen. Thomas and his work mate Ryan (name changed for privacy reasons) were driving home from work. It was 10.35pm when they arrived at Victoria Road where Ryan lives. Thomas stopped the car to let him out. At this point both men noticed a glowing object ahead of them in the sky, and slightly off to their left over a housing estate. It appeared to be about 600 yards from their location and was at quite low altitude, about the height a helicopter would fly at. The object appeared as a circular glowing white orb of light. Thomas estimates it was about 7-8 feet in diameter. It was moving on a straight and level path and travelling about 30 mph. 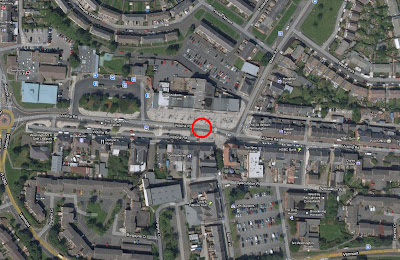 Thomas wound down his window to listen for any sound, but could hear nothing, the object appeared to be silent. By this time Ryan had got out of the car and was attempting to film the object on his mobile phone camera. However the camera could not focus properly on the object. The UFO was moving in their direction. As it approached they discussed it, wondering what it could be. It had no other lights on it, and did not look like a helicopter or plane. It also appeared to be too large to be a lantern.

After about 30 seconds suddenly the light on the object went out. However they could still see it silhouetted against the sky. A few seconds later it suddenly shot straight upwards at an extremely fast speed and was lost from sight. When it did this the men knew immediately that it had not been any conventional aircraft or other mundane object.

They checked back the footage but unfortunately it was very bad as the camera had not been able to focus on the object. Ryan decided to delete the footage off his phone. This is a shame, as even if it was out of focus it would have been interesting to see.

The following day they told their friends at work about the sighting, but they did not believe them and thought they were taking the mick.

I receive many sightings of glowing orbs of light after dark. Generally these can be put down to Chinese lanterns or LED balloons, both of which are becoming increasingly popular. If it wasn’t for the incredible manoeuvre that the object made I would certainly have put the sighting down to a white coloured LED balloon. However the fact that the light went out and then moments later it shot straight upwards means that it cannot have been any kind of inflatable. Chinese lanterns do go out in the manner described, but when they do they are then either not seen at all or are seen to slowly float to the ground as there is no longer a source of hot air to keep them afloat. It could not have been a helicopter as it was silent, and left the area too rapidly. Also there would be no reason for a helicopter to turn all its lights off in the manner that was seen.