In June 2011 Pat McDermott got in touch with me about a very strange sighting that his wife and daughter had experienced back in 2009. This report covers the incident and my thoughts on what took place. Unfortunately Pat has not got back in touch so only limited information is known about this incident.

For reasons of anonymity pseudonyms have been used for some witnesses

At some point in 2009 Pat, his wife Dianne and daughter Emily were on their way back home in their car. Pat has not provided me with the location where this incident took place. Pat was driving; Dianne was in the passenger seat and Emily on the back seat. Suddenly Dianne exclaimed “Look there’s a flying car!” She was looking out of the passenger side window. Emily looked out and saw what she was referring to. Pat tried to see but due to the angle could not, and did not stop the car to take a look. His wife and daughter described it as an old Ford Station Wagon. They began laughing, assuming that it was a UFO and that the aliens inside had disguised it as a car without realising that cars don’t fly. The whole thing sounded so farfetched to Pat that he did not believe them at the time. 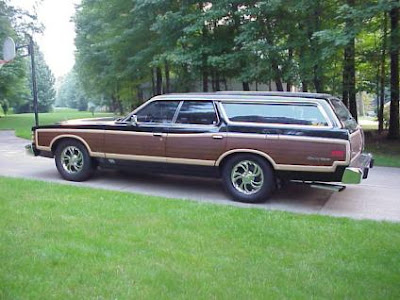 In early June 2011 he was discussing the incident with Dianne. They decided to go online and see if anyone else had ever reported anything similar. They were astounded when they came across a article reporting that back in 1969 a lady and her daughter from Alice Springs, Australia had not only seen a UFO shaped like a car, but it too had looked like a Ford Station Wagon. Here was an article from the other side of the world speaking about a near identical sighting!

I too was able to track down the article that Pat and Dianne found. It exists on the Ntnews.com.au website. Below is this article in full:

A woman claims she was cut off by two alien beings in a spaceship shaped like a Ford station wagon - before it took off surrounded by green, blue and red flames.

It was just one of the stories to come out after ABC morning show presenter Leon Compton opened up the airwaves to UFO believers.

Betty from Alice Springs said her close encounter occurred in 1969. She was driving 20km south of Aileron towards Alice Springs at 4am with her six year old daughter when they saw the vehicle "flying alongside us". "We saw these two figures inside this thing. It looked like a Ford station wagon, with the windows. It came in front of us really quickly."

Her daughter then said, "There's nothing to be afraid of."

"And as I was talking, the whole think took off like a shot out of a gun...and then there was all this green and blue and red flames or lights all around it."

The way in which Pat described the sighting to me means I do not have any questions over its authenticity. I feel quite sure that his wife and daughter really did see what appeared to be a flying car in the sky. However I am far from convinced that it was a UFO disguising itself as such.

It has been seen in many different cases that the ETs do have the ability to mask either their own appearance or the appearance of their craft. This is commonly referred to as a screen memory. However this would generally occur as part of a contact experience involving direct interaction between the ETs and the witness. It is unlikely that they would have projected such an image into the minds of Dianne and Emily (and presumably anyone else who happened to notice it). Also I find it extremely unlikely that an advanced ET species would make the mistake of disguising their craft as a land based vehicle, this is quite illogical.

However, considering the fact that there was another report describing a near identical UFO back in 1969, we should not put out of the question that it was a genuine craft, just one that happened to look very similar to a Ford Station Wagon. You may feel this sounds too ridiculous to believe, but if the case from Alice Springs is real then Dianne and Emily may have seen a similar object.

But there is also another possibility, one which sounds more probable. I feel that rather than observe a UFO, Pat’s wife and daughter may have seen a novelty hot air balloon shaped like a car. Or perhaps it was a helium filled car shaped inflatable which had been used at a museum or celebration and had broken free from its tether and so was drifting across the sky. This seems a far more plausible explanation, considering the rarity of sightings of this type.

Out of interest I have had a look around the net to see what else I could find on flying car sightings. I came across an apparent floating car seen in Perth on Google Earth! For further details on this amusing story head on over to the following address: