At 8.30pm on 20th October 2010, Mikey was dropping his girlfriend off in Carelton after an evening out. Due to the time of year it was already darkin the sky, but was a clear evening and the stars could be seen. After his girlfriend went inside, a light in the sky to the South caught Mikey's attention.

Looking into the sky he was amazed to see a black triangular shaped craft. It was about 500 metres from his location. It looked about 30 feet in length. On the underside of the craft were four lights. There was a bright yellow light at each corner and then a central red light which was flashing. Mikey is interested in UFOs and so immediately felt that it was an extraterrestrial craft. 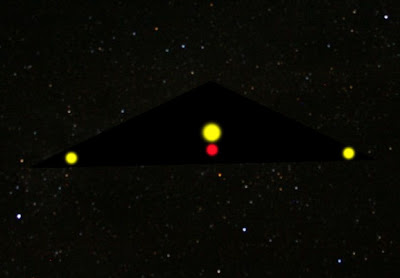 The UFO was hovering completely motionless and was silent. After about two minutes it suddenly began moving away to the South in the direction of Rotherham/Barnsley. It was moving slower than a plane would, and he continued to watch it until it had gone out of sight.

Five days later while at work, Mikey read an article in The Sun newspaper about a daylight sighting of a triangular-shaped UFO in Rotheram, complete with a photograph. The article did not give the date of the sighting, but Mikey wondered if it was possible that this was the same craft he had seen, as it had flown off in the direction of Rotherham.

Below is a link to the online newspaper article:

This is a very convincing sighting, and I believe it may well have been of a Flying Triangle craft. This type of craft has been seen many times all around the world, especially over the last couple of decades. The colour, shape, size and lighting configuration that Mikey mentions are both commonly reported, although not always identical (for example, sometimes the central light does not flash). As the object hovered still for two minutes it cannot have been a conventional aircraft. This lighting configuration does not fit with it being a helicopter, also it was completely silent, if it was a helicopter Mikey would certainly have been able to hear it. It appeared to be too large to be a remote controlled model, and is very unlikely to have been a lit inflatable object.

Some people believe that flying triangles are actually a secret military project, however if this were the case they would not fly them over populated towns. Also they have been seen to perform very advanced manoeuvring capabilities and move at incredible speeds, and this craft type has also been reported in numerous contact cases involving alien abduction or sightings of beings. For these reasons I believe that these craft are extraterrestrial in origin.

The image that appeared in The Sun is apparently a fake. Another researcher has discovered that the main photograph in the article is from a completely different case about a daylight meteor seen over Bristol in August 2010. You can see the article featuring the same photograph here:

The circular inset is more than likely a doctored image of the UFOs photographed over New York on 14th October 2010 (Which were probably balloons). This incident featured in The Sun as well. To see the similarity in the two images click on the below link to it:

Either The Sun has been duped by the man who claimed to have taken the photograph(s) or they have knowingly faked the image in the article themselves for whatever reason.