This report covers an interesting sighting of numerous UFOs that were seen near to the town of Bel-Air in Marbella, Spain in October 2006 by many witnesses. These UFOs could also have been responsible to a number of animal mutilations which apparently occurred in the area.

Back in 2006 Jason Harrison lived across in Bel-Air. He has since moved back to live in the UK. On the evening of 20th October between 7-8pm, he was at a coffee house named Bocadillos, on Av De Gomez Barrio, just off the A7. Jason had just sat down at of the outdoor tables with an end of work beer, waiting for his boss Santy and work mate Gavin to show up. He was facing towards Mount Estapona and surrounding hills, which lies to the North of the town. It was a clear and warm evening with good visibility, and was just starting to get dark.

Aerial map of sighting location, indicating the position of Bocadillos: 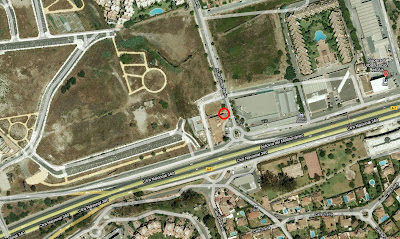 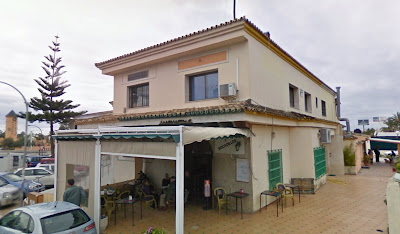 Directly opposite Bocadillos across the road is a large supermarket named Mercadona. There were quite a few people around, heading into and coming out of the store. All of a sudden Jason heard people standing outside the supermarket start to gasp. He looked across at them to see what was going on. They were staring and pointing towards the hills. Jason and several others at Bocadillos looked in the direction they were pointing. There hovering in the air above the hills in the distance were four spherical objects. Three of the spheres were white in colour, and appeared to be circling anti-clockwise around the fourth object, which was a whitish-green colour. All the objects looked the same size, but it was hard to tell exactly how big they were. However they were 6-8 miles away so must have been quite large to have been made out in the first place.

Photograph of Mercadona supermarket from the sighting location: 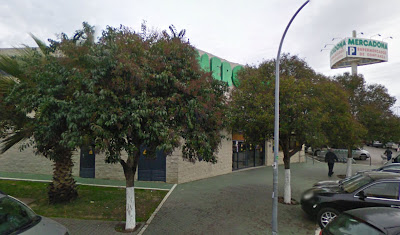 Photograph from the sighting location in the direction the UFOs were seen in: 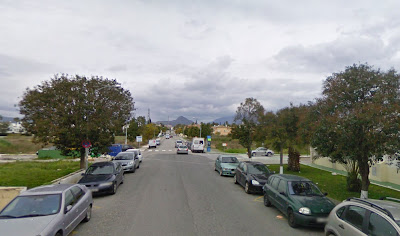 The outer three spheres were moving quite slowly around the fourth, in a continuous and obviously directed path. Jason was astounded by what he was seeing. He was certain that he was watching advanced craft and thought to himself “It’s about time I saw a UFO”! He and the other witnesses continued to watch the objects for about 25 seconds, during which the three outer objects had gone round the central one three times.

Drawing of the UFOs based on witness description: 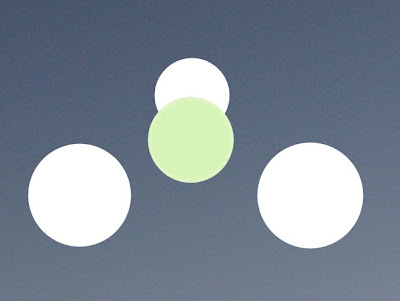 Without warning, the three outer objects then increased in acceleration to an incredible speed and shot off to the North, leaving the fourth object on its own! The remaining object then started to slowly descend in altitude towards the hills at a continuous speed. Jason watched it for about 7-10 seconds until it had gone out of sight due to its low altitude. It looked as though it was going to land.

After it had disappeared from view, Jason continued to sit at Bocadillos and think about what he had just seen. The twenty or so other people outside the supermarket gradually dispersed. He did not speak with them about the incident because his Spanish was not good, and they looked like they were locals. Santy and Gavin turned up and Jason told them about what he had seen, they did not seem too bothered. Jason remained in the area for the next hour, and kept watching to see if the objects would turn up again but they did not.

At the time, Jason was living at the house of his girlfriend’s mother. Later in the evening he told his girlfriend and her mother about the sighting, but they too dismissed it. That night he did not sleep too well, and lay awake thinking about the UFOs.

Over the following days, Jason kept an eye on the newspapers to see if the incident had been reported. He thought that due to the number of witnesses it was likely it would have been reported, however he never saw any articles on it at all.

Two weeks later, his girlfriend’s mother’s friend Anna came to visit. She told Jason that there had been a story in the local newspaper from a farmer who owned fields in the hills over which the UFOs had been seen. Apparently six of his goats had gone missing without trace overnight.

Anna lived up in the hills and knew the farmer personally. A month later she came to visit again, and told everyone that two of the goats had apparently been found a mile away from where they should have been, completely stripped of meat, with no blood stains on the ground.

This is an impressive sighting, made all the more so by the number of witnesses. The UFOs were clearly solid objects, and appeared to be under intelligent control. They performed manoeuvres far in advance of conventional aircraft, and could not have been randomly drifting objects such as balloons. The speed at which the outer objects left the area could not have been performed by remote controlled models, and the fact that all of the objects did this at once again suggests intelligence. It is unlikely we will ever know if the remaining UFO actually landed in the hills North of Bel-Air.

Could the disappearances/deaths of the farm animals in the following weeks have been related to this UFO activity? It is certainly a possibility worth considering, and adds further mystery to the incident. The lack of blood at the scene of the dead goats suggests that these may have been genuine animal mutilations rather than just normal deaths. Whether or not this incident was related, this case is very interesting indeed, and has a number of aspects which cannot be explained easily.