On the evening of Saturday 20th September, in the area of Essington north of Birmingham, an event involving numerous anomalous aerial objects took place. This event was witnessed by couple Carl and Jessica (names changed for privacy reasons), and is both very unusual and intriguing. I interviewed both witnesses at their house about their sighting, and also visited the location of the incident.

The two witnesses were on their way out for the evening. It was about 8.00pm and very clear and still, with barely a cloud in the sky. The stars and moon were already visible although the light had not completely died. The couple were driving along Blackhalve Lane when Jessica suddenly noticed some unusual objects in the sky to their left. There were five bright orange orbs in a line that appeared to be following each other. She asked Carl what he thought they might be, but both witnesses were stumped. They pulled into a lay by at the side of the road to get out and take a better look.

Photograph of sighting location in the direction the orbs were seen in: 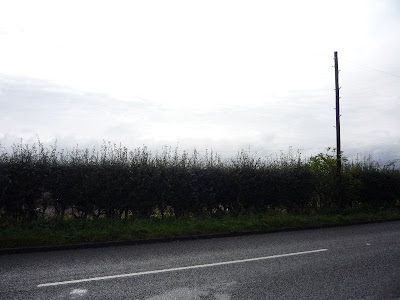 From the lay by, a hedge blocked their view of the horizon, but they had a clear view of the sky and the orbs. They appeared quite large, Carl estimated they were about the size of small aircraft, although it was quite hard to judge exactly how far the objects were from them. Both witnesses were amazed at how clearly defined and bright the orbs were. They were also completely silent. The witnesses could hear muffled voices coming from a nearby house and also dogs barking as if agitated by something. The orbs were gaining altitude about the same speed as a plane coming in to land, and heading in a steep angle into the sky. Jessica tried to get some video footage of them on her mobile phone but sadly it was too dark and did not come out. As they watched, a 6th object appeared lower down and moved towards the others, although did not move in line with them. They kept watching in amazement as a 7th object also appeared. But these orbs were not to be the only unexplained things they would witness that evening.

As the 7th orb moved towards the rest of the group, Jessica suddenly noticed another object off to the right in a more easterly direction. It was a huge black shape that was slowly descending and blocked out the stars. Jessica described it as a collapsed parachute/mushroom shape, where as Carl thought it looked more oval. They could make out no markings or lighting on it. It appeared to be further away from them than the orbs, and also extremely large in size. Both witnesses were confused as to what they were seeing. Carl jokingly said “it must be the mother ship”. The object descended until it disappeared into the horizon. They half expected to see some kind of explosion but there was nothing.

Photograph of sighting location in the direction the black object was seen in: 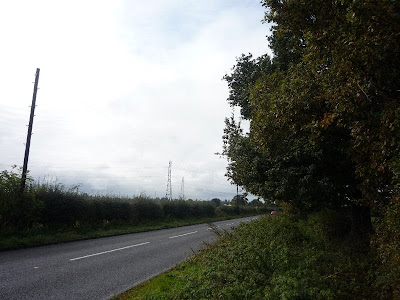 The witnesses looked back at the orbs which were still climbing into the sky at a steep angle. The objects continued like this until they were extremely high and then one by one seemed to suddenly blink out. Jessica said it looked almost as if they had zipped away at high speed, although neither witness actually saw any movement like this. Once the objects had vanished, the witnesses also noticed that the dogs they had heard had ceased barking. The entire sighting lasted for about 5-6 minutes and both Carl and Jessica were baffled by what they had witnessed. They got back into the car and continued on their journey, wondering what the orbs and the unusual black shape could have possibly been. 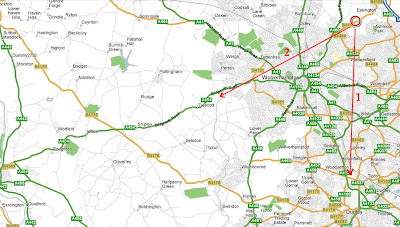 Painting by Carl depicting both the orbs and the black object, drawn shortly after the incident. Note: Picture is representative - the black object was actually much further away to the right of the orbs: 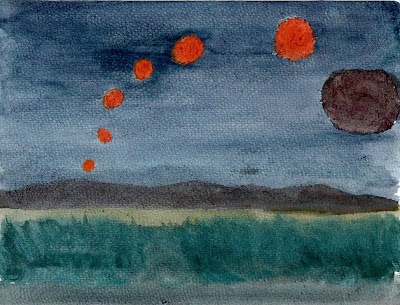 Orbs and black object as seen by Jessica: 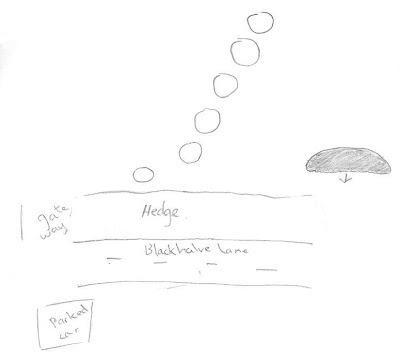 This incident appears to be made up of two distinct parts. There is no evidence that the orange orbs and the large black shape were related, other than the fact that they both occurred at the same time. This could just be down to coincidence, so we should analyze them independently.

The most probable solution of the orange orbs is that they were some sort of lit up balloons / chinese lanterns. The five initial objects were in a row but this could have been because they were launched one at a time from the same location. It was a very still evening so they would not have drifted much, and could have stayed in a rough line as they ascended. The other two objects could have been caught in air currents and drifted away from the line prior to their appearance in the sky. Another explanation for the line of orbs is that they were tied together by a string. Maybe they were part of a decorative display that broke loose and drifted away. Once the balloons reached a certain altitude their flames would go out which would explain why the objects seemed to blink off one at a time. However to counteract this theory, both witnesses said that the objects looked far too sharply defined and bright to be lanterns, and also appeared to be too large for this possibility. They have also watched some videos of lanterns on the net, and insist that the objects they saw did not look the same. The speed of the objects must also be taken into account. Carl said they definitely looked like they were under intelligent control and not randomly drifting, and that they seemed to be moving quite fast. They moved from right down near the horizon to an extremely high altitude in the matter of a few minutes. It is highly unlikely the orbs were lights from aircraft due to the unusual movement pattern as well as their colour. Aircraft lights are bright white, red and blue, not glowing orange. There is also the fact that the orbs appeared to be completely silent. As it was a still night, any sound they made would have been heard by the witnesses. Is it possible the orbs were some sort of earth lights? Again this is improbable. Earth lights do not generally occur over cities, and also are less clearly defined. It is unlikely earth lights would form a pattern similar to what was seen.

It is hard to speculate what the large black object could have been. If it was some sort of airship or balloon, you would expect to see occasional bursts of flame to keep it airborne. It was descending, so could it have been some kind of balloon coming in to land? Both its size and shape seem to defy most other explanations. Could it have been somehow related to the glowing orbs? Carl even speculated that it may have been one of the same objects without a light source. However it appeared to be further away not closer than the orbs, so it would seem to be far too big for this to be the case.

It is unknown if there were other witnesses to this incident. Carl and Jessica said they could hear voices coming from a house further down the road while they were watching the objects, but so far nobody else has come forward to say they have seen anything. Due to the number of objects and the length of time they were in the sky for, it seems probable that other people would have seen them. Without an exact position of where the orbs or black object were located it is difficult to investigate further. We can only hope that more witnesses come forward to report this event. It is interesting to note that there has been another recent sighting of a clearly defined, large orange orb over the Moseley area. Could the two incidents be related in some way? I am certain that we have far from seen the last of glowing orb sightings over the Birmingham area.