This report covers a stunning sighting of two different UFOs seen by taxi driver John Wall on the same night. It is highly likely that these two sightings were related. Each will be discussed in depth. There is also a possibility that John experienced missing time. The incident took place on a Sunday evening in 1999 (The exact date is not remembered)

Back in 1999 John worked as a taxi driver in Warrington. He had finished his night shift ferrying people back and forth, and was on his way back to his home in Runcorn. It was a dry and relatively clear night with light cloud cover. He decided to drive through the village of Moore along Runcorn Road. He was driving along a straight stretch of road towards Sandymoor Housing Estate when he realised there was a light low down in the sky off to his left which he could see over the top of the hedgerow. 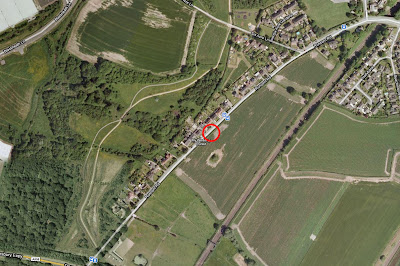 Photograph from Runcorn Road showing the fields over which the UFO was hovering: 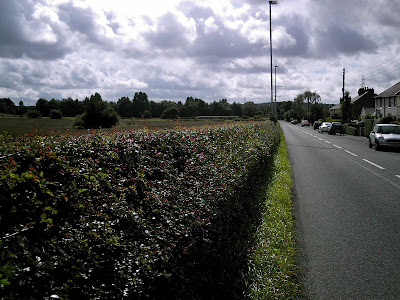 The light appeared to be a glowing object about 30-35 feet from the road and was bright white with a slight blue-ish tinge. It was about the size of a bowling ball, and was about 15-18 feet in the air. John slowed down the taxi to take a look at the object. He noted that it appeared to be keeping pace with his car, it slowed down as he had, and it remained at the same distance and height from his position. John stopped the taxi, and as he did so the object also stopped. He checked to see if any internal lights had been left on which could account for the UFO, but he soon eliminated this as a possibility.

John continued driving forward, slowly at first, and the orb of light continued to follow. He thought that perhaps it was a surge of energy from the nearby electrified railway line, and could possibly be something natural such as ball lightning. However the railway line was 130 yards away, and this explanation did not account for the fact the object appeared to be tracking him. He accelerated and the object continued to follow alongside until he went under Daresbury Expressway. After the underpass he checked for the light but could no longer see it, so he continued his drive to Runcorn.

Aerial map showing the route over which the UFO followed the witness: 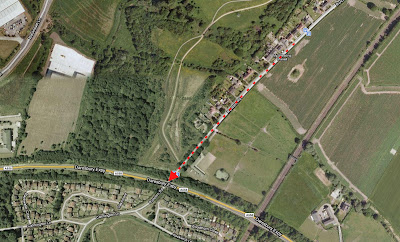 About 12-15 minutes later, John was nearing his home in Runcorn. His route home took him past the car park at Runcorn East railway station. 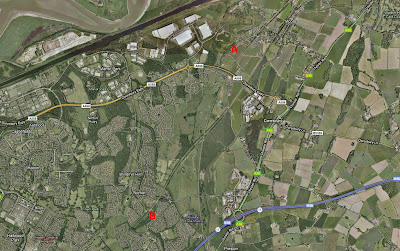 As he drove past it, he suddenly realised that there were some lights above him to his right. He looked out of the driver side window up into the sky and was astounded by what he saw. There about 300 feet up was what looked like a huge black or dark metallic triangular shaped craft! Around the underside of the three edges were rows of small evenly spaced dark red and dark green lights. Although there were no obvious markings on the body of the craft, John says that there was a differing shape to the base in some way, but he did not get enough time to study this in detail. The craft was moving very slowly, John estimates about 5-10 mph but this was hard to judge. Each side appeared to be about 600-700 feet in length.

Witness drawing of the Flying Triangle:

Photograph of the car park of Runcorn East Railway Station over which the FT was seen: 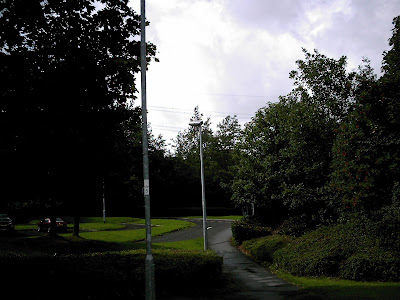 John immediately knew it was not a conventional aircraft of any kind – it was much too big and was also completely silent. He wanted to get a better look at the object, so he stopped the car and tried to get out, but as it was dark he fumbled with the door handle. During this time the triangle continued to move slowly forwards. John managed to grab a hold of the handle. At this moment the triangle appeared to slightly increase in speed, and then suddenly vanished from sight.

John got out of the car and stared up into the sky wondering where the object had gone and what it could have been. If the object had actually massively increased in acceleration rather than simply vanished, then the speed involved would be absolutely incredible. John waited a while but realised the object was probably not going to come back, so in the end he got back in the taxi and drove the remainder of his journey home.

Because of the alarming nature of the incident, John did not tell anyone of the incident for quite a while afterwards, even his wife. He has since shared the experience with her and other close family, but does not talk about it with many people because of the ridicule factor.

John gets the feeling that he made a mistake regarding the time of the two sightings. He assumed the time was about 2.30am when he saw the glowing orb. His shift had ended and this is the expected time that it would have been, although he doesn’t remember looking at the clock during this sighting. After the Flying Triangle had departed, John checked the time and it was 4.30am. If the orb sighting really did occur around 2.30am, then the clock was now much further forward than it should have been. Sadly John did not check the time until after the FT, so he may well have misjudged the time when the orb sighting took place.

Missing time often occurs when contact takes place, as the ETs have a way of blocking out memories so the clock appears to jump forward. John is not currently aware of any interaction which took place other than the orb following his car. He also feels that if there had been any contact, he would not remember the orb sighting at all. However quite a number of contact cases have both started and finished with a UFO sighting, it is only the details in between which tend to be blocked out. Could the orb have been some kind of scouting craft which then led to John being taken by the Flying Triangle craft? This is a possibility, but does seem unlikely. Usually the individual would have an inkling that something else had taken place or feel strange in some way, but John felt completely fine throughout the incident.

This is an absolutely amazing incident which I believe involved two intelligently controlled advanced objects/craft. The fact that the glowing orb matched the speed of John’s car, even when he brought it to a halt, cannot be just coincidence. The object followed him for quite a distance, and was clearly matching his speed throughout. This implies that it was under intelligent control and specifically interested in him/his vehicle for whatever reason. It also means that the object could not have been a lantern/LED balloon or ball lightning. The orb appeared to be quite small in size, so if it was a genuine craft it can be assumed that it was probably unmanned - possibly being used for observation purposes.

The second sighting was of a “classic” Flying Triangle craft. Large black triangular shaped UFOs with multi-coloured lighting along each side have often been reported all around the world (In other cases the craft have a small light at each corner and a larger central light). It is very unlikely to have been an inflatable or model of some kind. John even speculated that it could have been some kind of hologram, but for what reason would anyone display this in the middle of the night? Also the object definitely appeared to be a solid structure. Also if it were an inflatable or model it would not have suddenly vanished from the area.

It seems very likely to me that the two sightings were related in some way. They were in the same local area and appeared to be only 15 minutes apart (ignoring the possible missing time). Perhaps the glowing orb was in communication with the FT and relating details to it. Perhaps the orb was actually the FT but under a completely different form. On the third night of the infamous Rendlesham Forest incident a small glowing orb suddenly transformed into a much larger solid craft in front of many witnesses, could this have been something similar?

I have already covered the possibility that John experienced contact during the proceedings of the incident. At the moment we have no way of knowing for sure, unless John recovers further memories of the incident, possibly through hypnotic regression. If any further details come to light they will be added to this report.