Back in 1995 Gary Barnacle had a close encounter with a massive Flying Triangle craft over Birstall. In 2010 he finally decided to come forward and share the details of this fascinating incident.

Gary cannot remember the day or month in which the incident happened, but does know that it was about 9.30pm. It was a mild and clear evening and the stars were fully visible overhead. Gary was on his way to meet up with a friend at a local pub. He parked his car and walked to the ATM of Barclays Bank on Sibson Road to get some money out. It was a quiet evening and there was no-one else around. 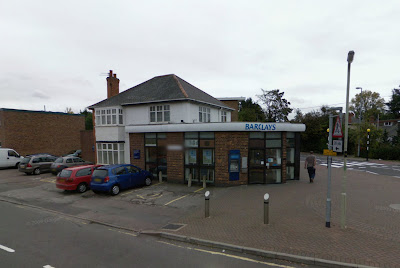 As he was using the machine he suddenly became aware of movement overhead. He turned and looked up and was astounded to see the corner of a massive triangular-shaped craft. The object was black in colour and blocked out the stars, so its shape could be made out against the sky. It was not equilateral but slightly elongated. There was a bright white light underneath at each corner. The craft appeared to be about the size of a football pitch, and was roughly 125 feet high. It completely covered most of his view of the sky. The front corner of the craft was almost overhead. Looking back along the road, he could see the rear of the craft with the two corner lights. 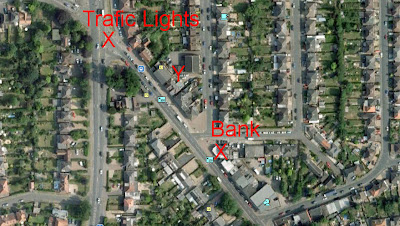 Photograph from the sighting location in the direction which the craft appeared from: 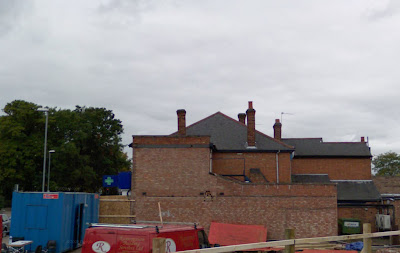 The object was drifting slowly towards the South East following the direction of the road. When the front corner of it was overhead it suddenly halted, almost as if it was observing him. It was completely silent. It remained stationary above him for about 30 seconds.

Suddenly without warning, the craft massively increased in acceleration and shot away to the South East. It moved away so fast it looked blurred, and was completely lost from sight in only a second! Gary was absolutely shocked at what he had just witnessed. He continued his journey to the pub, but when he told his friend what he had seen his friend made fun of him so he decided not to mention the sighting to anyone else.

This is almost certainly a sighting of a Flying Triangle craft. This type of UFO has been reported many times all around the world, especially over the last couple of decades. The object was clearly much too large to be some kind of inflatable or model, and the fact that it moved away at a tremendous speed after remaining stationary also shows that it was under intelligent control.

The massive size of the craft, its colour, shape and lighting are all commonly reported, although usually there is also a central light underneath as well as the corner lights. However there are variations on the lighting configuration and colours seen. Some believe that these craft are an ongoing secret military project, but if so I find it highly improbable they would fly one of them at low altitude right over a populated town, this would not make any sense at all. Also the manoeuvring capabilities of Flying Triangles are very impressive and far in advance of any known conventional aircraft. I certainly believe that they are ET in origin, and that this was a genuine sighting of one of these craft.