John (name changed for privacy reasons) has had two fascinating UFO sightings, both of which took place in the 1970’s. His first encounter was with five disc-shaped UFOs, and was seen by both him and many other witnesses. This experience fits in with an incident involving a formation of UFOs that was seen at various places around England in the summer of 1974 (see seperate case report).

John’s second experience occurred several years later, and it is this sighting that this report focuses on. It is every bit as unusual and impressive as the first. Unfortunately John has so far not got back to me with additional information, so I only have his initial notes to go on.

The incident occurred in 1976 or 77. If it really occurred three years after the first incident, then this would make it 1977, and John would have been around 14 years old at the time. He was sitting at the bottom of the street on which he lived in Aigburth, Liverpool, chatting with a friend.

They suddenly noticed a large glowing red ball of light travelling along above the Mersey river. As they watched it raised up and then settled in the area known as the Cast Iron Shore. When it did this, it lit up the whole area in a red glow. John and his friend stood up and walked down to the bottom road. There they found that there were other neighbours outside on the street also watching the object.

Aerial view of Aigburth, the location of the area known as Cast Iron Shore: 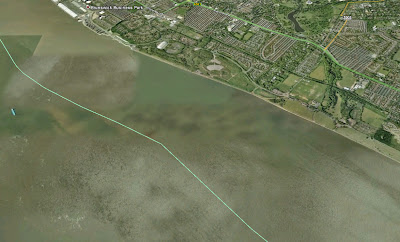 About a minute went by, with the object remaining stationary. Then suddenly it shot straight upwards at a stunning speed and was lost from sight! Soon afterwards John remembers that the incident was mentioned on the local radio, and also was mentioned in the Liverpool Echo newspaper.

This is a fascinating multiple witness sighting. Red glowing UFOs are not often seen and are quite unusual. The manoeuvres the object performed indicate that it was under intelligent control. They also mean that it cannot have had a mundane explanation such as a lit inflatable or model. Even a more unusual explanation such as an earth light does not really fit with what took place – these rarely appear over cities or water, and do not suddenly rise straight upwards at great speed. The fact it was seen by multiple individuals, and afterwards appeared in the newspaper and on the radio means that it could not have just been the boy’s imagination, it clearly took place and was really present.

I am currently attempting to track down the newspaper article that John mentioned. As the exact date is not really known this is proving to be quite challenging. If I manage to get hold of it I will add it to this report.