On the afternoon of 18th May 2014, Lee Jessup was in the garden of his house on Mill Lane, Govilon, Abergavenny playing with his pet dog. It was a bright, sunny and still day with hardly any cloud. 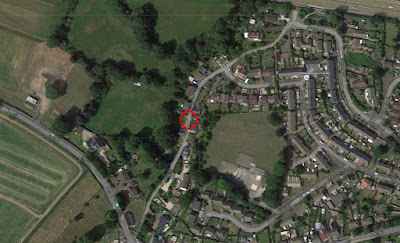 At 2.41pm Lee threw the ball for his dog to fetch and was looking to the North North East when he noticed a strange object in the sky. He estimated it to be about 2000 yards away from his location and at an altitude of about 2000 feet. The object appeared to be a dark grey metallic disc. It was hovering completely motionless and seemed to be silent. Lee estimates it was about 50-75 feet in diameter. There were no markings visible on the object.

Intrigued, Lee stared at the object trying to figure out what it could be. A minute later his wife Alicia got home from work. When she came out into the garden Lee pointed the object out to her but she didn’t have her glasses with her so could not see it. At this point Lee decided to head indoors a moment to get his compact camera. When he returned outside 30 seconds later the object was still present. He tried to take a zoomed photograph but the camera wouldn’t focus on it, so instead he took a wide shot. He then momentarily took his eyes off the UFO to manually zoom in on it on the camera screen and show Alicia.

When he looked back to the sky the object had vanished. It was a clear day so there was no clouds or other objects it could have moved behind, it was just gone. He and his wife continued to watch for it, but the object did not reappear.

Soon afterwards Lee got in touch with BBC Wales and sent them the photograph, but did not hear back from them. He told a number of people about the sighting. They either did not believe him, or thought it was probably something conventional, but had not seen the photograph so were basing these theories on description alone.

Below is the original photograph which Lee took from his garden. The UFO can be seen above the right edge of the building: 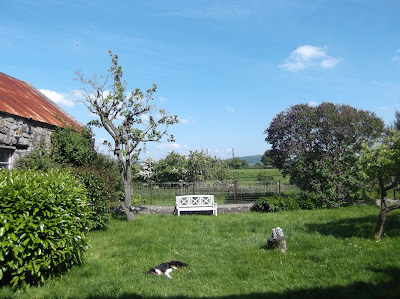 Obviously the object is quite small in terms of the whole photograph due to its distance. But luckily the photograph is of good quality so it is possible to zoom in and pick up detail. Here are zoomed and edge find views of the object: 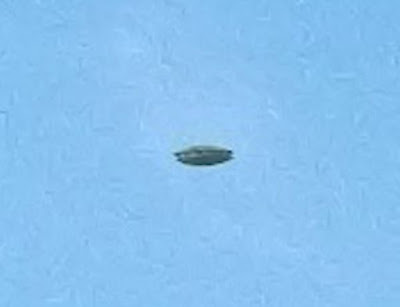 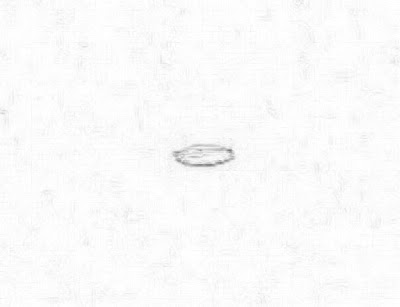 As you can see the object certainly appears to be as Lee described, a flattened dark grey disc. The darker area around the middle of the object gives it the appearance of two plates placed face-to-face. Lee says that this was only visible on the photograph, not to the naked eye. This split into two distinct halves can be seen even clearly when the photograph is sharpened: 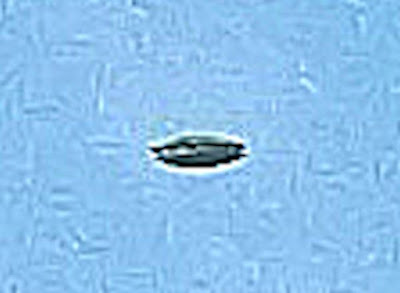 It is also worth noting that there is an area of paleness around the object. This could suggest a field around it, distortion of the air, or even some kind of fumes coming off it.

This is quite an impressive sighting backed up with photographic proof. It certainly seemed to be a solid object present in the sky. Because of the appearance of the object most mundane explanations can be discounted. It is clear that it was not an aircraft or helicopter of any kind. Could it have been some kind of novelty inflatable? It was a still day so a drifting inflatable could appear to hover in a stationary position. It was a bright sunny day, perfect weather to launch a solar airship. However it appeared to be quite large in size, and was the wrong shape for a solar airship, which are usually cylindrical. Also if it was an inflatable/solar airship how could it have suddenly vanished without trace in a clear sky? There was nowhere for it to have gone, and if it was hovering still then logically it would have continued to do so and still been visible when Lee looked back up from the camera screen.

Could it have been a secret military craft of some kind? As with most UFO sightings this is a slim possibility, however it seems illogical that the military would fly such a craft in a clear sky in full sight of civilians. It would also have had to perform an extremely fast flight manoeuvre to have vanished from sight in such a short space of time.

Although the object on the photograph is quite distant it does back up Lee’s report of the object. It would be quite easy to hoax such a photo, however after speaking with Lee about the sighting I see no reason why he would have made it up. He has not attempted to sell the photograph to anyone and he comes across completely trustworthy.

I feel that after looking into the details of the sighting and analysing the photograph there is a good chance that this is a genuine sighting of an advanced craft of possible ET origin. If so, it is interesting that it vanished precisely when Lee looked down at his camera to zoom in on the photograph he took. Was this just coincidence, or did the UFO have occupants who were aware that he was not looking at this moment and so decided to depart? We will never know for sure but this is an additional point worth considering.