Nick has had two fascinating experiences which could well be ET related. The first is a sighting of a glowing underwater object that he saw while on holiday in India. It is quite rare for BUFOG to be contacted regarding USO sightings, but as this incident shows, they do occur from time to time. A year later Nick had another sighting of a glowing UFO from his home in York. This report covers both incidents in depth.

Between February and March of 2007 Nick and his partner went on an extended holiday to South India. On the 18th March they were staying at the Bethsadia Hermitage in the state of Kerala, a few miles from Kovalam Beach. There were not many guests there due to the time of year. 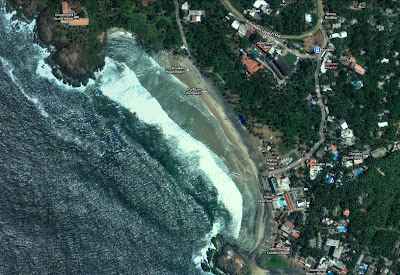 At 4.15am that morning Nick got up early to watch the local fishermen head out to sea from the beach. It was a warm and still morning. The sun had not risen yet, and there appeared to be a localised electrical storm about 400 yards out to sea. However there was something strange about this storm, it looked like the lightning strikes were coming upward from the sea itself!

After a few minutes the fisherman suddenly began to get excited and started pointed at a dull yellow light which appeared to be coming from underwater around the area of this storm. It was moving parallel to the beach and looked like it was close to the surface. There was no wake or turbulence on the surface. From their vantage point both Nick and the fishermen could clearly see the object. The fishermen were chattering amongst themselves in Malayalam, Nick had no idea of what they were saying to each other.

After a short while the light suddenly vanished. The air was filled with static electricity which made the hairs on Nick’s arms and head stand up. The fishermen did not head out to sea so Nick returned to the hotel. When he got back he found out the electrical supply had been affected, and also the Kovalam lighthouse had briefly stopped working. Power cuts are common in India so Nick has no idea whether these incidents were linked with either the light or the storm.

When he told the hotel manager about the light he had seen, the manager informed him that lights are seen underwater in the area from time to time and that nobody has been able to find out what they are. Apparently when the lights are seen the fishermen are not able to catch any fish in the area, which is why they had not headed out to sea. Nick finds this interesting as fish are usually drawn to light not scared away by it. The fishermen believe the lights are supernatural in nature.

Later in the morning Nick went for a swim and he noticed that the water felt heavy and he seemed to be more buoyant than usual. He has no idea if this was related to the incident or not, but felt it was worth mentioning.

It is rare that BUFOG receives details of a USO sighting, but they do happen from time to time. Incidents such as this one support the theory that the ETs are using our seas as bases and are living alongside us out of sight.

It is interesting that the yellow light was seen at the same time as the electrical storm. This could be purely coincidence but the two are probably linked. Perhaps the bolts of lightning were actually coming up from the object rather than down from the clouds. However this could have been an optical illusion. If they really were coming from the sky, perhaps the USO was the cause of the storm in the first place and the lightning was attracted to the object. Could the USO have actually been an electrical build up of energy being discharged in the water? Although worth considering, this seems unlikely due to the fact that the light did not remain in the one area but actually started moving along underwater.

The fact the light moved also means it could not have been the morning sun reflecting off the surface. Also the fisherman would not have been reacting in the way they did unless it was defiantly something out of the ordinary – if it had been sunlight then they would be used to seeing it. The actions of the fishermen also mean it cannot have been misidentification of ships lights, they would certainly have known what these look like.

It is unknown whether any of the electrical issues reported at the time were down to the proximity of the glowing object, whether they were down to interference from the storm, or whether it was merely coincidence. The fact that the hotel manager confirmed that unidentified lights had been seen underwater on previous occasions certainly points towards this being a genuine sighting of something unusual.

If it was an actual glowing object what could it have been? It seems very unlikely that the military would be moving around underwater in an object which was so conspicuous from the shore. They would certainly have been aware that this area was used for fishing purposes and that they would be seen by the fishermen. Therefore I feel there is the possibility that this was something else entirely, an advanced underwater craft of some kind, perhaps extraterrestrial in origin.

It was midnight on a night in March 2008. Nick was at his home in Wilberfoss, York. He was about to get into bed and glanced out of the bedroom window. It was a clear night with good visibility. He looked up into the sky almost directly overhead and was amazed to see a glowing bright sparkling blue object.

Nick describes the object as looking like the shape of a manta ray but without a tail. It had a domed central section and then what looked like a wing sticking out each side which was curved downwards. There were no markings visible on the object. Nick estimates that it was at an altitude of about 5000 feet and was the size of a jumbo jet. It was moving on a North Westerly course and seemed to be travelling at quite a fast speed.

As it moved away Nick saw it silhouetted against the moon. He watched it for about a minute until it had moved out of sight. As it headed away he noted that the light was not really visible anymore, it was only really bright when it had been overhead. Nick’s wife was in the room and heard his shouts of surprise, but did not go to the window herself.

This is an interesting sighting. Nick feels it was definitely under control, whether manned or unmanned and was some kind of craft. While this explanation cannot be ruled out, I do wonder if the object could have been a novelty shaped blue LED blimp. These are large inflatables that come in a variety of colours and shapes, and can sometimes be remote controlled. While these are quite rare this is still a possibility. Perhaps the object was closer, smaller and moving slower than it appeared to be. It is hard to accurately judge distances of objects in the sky after dark as there is no point of reference.

You may feel that I am being overly dismissive here, but it is always good practice to take mundane explanations into account rather than assume everything is a genuine UFO from the off. I cannot really say either way, so the idea the object was an extraterrestrial craft cannot be put out of the question. It was certainly not a conventional aircraft or helicopter.

As you can see Nick has had two unusual sightings which appear completely un-related to one another. Both have very interesting aspects and could have been of very unusual objects. If he decides to stay in touch this report may be updated with further sightings as and when they take place.