Early in the morning of 17th January 2010 Michael and his girlfriend were walking his brother home. It was clear, frosty and still night with a full view of the stars overhead. They were walking along Piggots Croft in Chelmsley Wood, Birmingham. There was nobody else around. Michael often likes to look up at the stars, so was looking up as they walked along.  He suddenly noticed two glowing objects off to the right of him at around a 45 degree angle in the sky. They were initially side by side and were glowing orange-yellow in colour. They appeared star-like due to their high altitude, but appeared to be in the atmosphere. 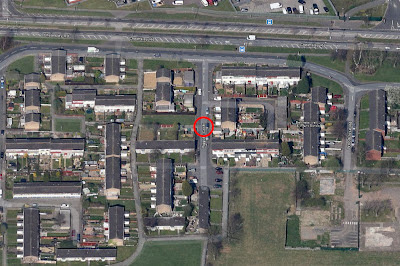 Photograph of Piggots Croft in the direction the orbs were first seen: 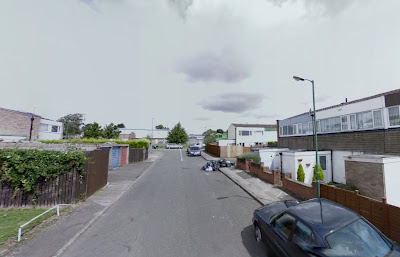 The objects were moving extremely fast and were moving towards his location. As he watched they switched places, and changed from moving side by side to moving one after the other. They flew overhead and once more switched to being side by side again. As they started to move off into the distance they suddenly parted in a completely synchronised manoeuvre. One flew off to the left and the other off to the right. Within a short moment they had vanished into the distance. The whole sighting was so fast that by the time Michael informed his girlfriend and brother about the objects they were gone.

Michael was in awe of what he had just witnessed. The objects had been moving much too rapidly to have been man-made objects such as high altitude aircraft or Chinese lanterns. Later on he calculated the speed that they must have been moving at based on the estimated height and distance they travelled. If the objects were about 1 km up then they were moving at approximately 1620 km per hour. If they were 4 km high then they must have been moving at around 6600 km per hour. They could have potentially been even higher than this, it was hard to tell. However it was clear that they were quite distant rather than small objects at quite a low altitude.

Soon after the sighting he got in touch with the local police force to ask if anyone else had reported the lights. The police stated that they had not had any other sightings reported. They also contacted Birmingham International airport to see if anything had been picked up on radar. But Michael was at least informed that nothing had been detected. Michael says that the direction the objects moved away in meant that they would have flown directly over the airport, so either they genuinely weren't picked up, or were but this fact was covered up.

Aerial map showing the sighting location (A) and Birmingham International airport (B): 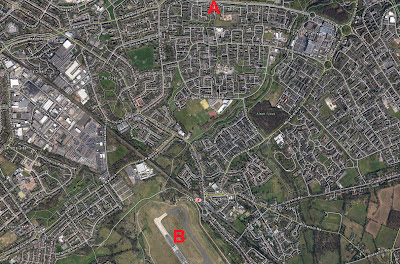 This sighting is truly fascinating and after speaking with the witness I feel quite sure that this was a genuine sighting of two advanced craft moving at an incredible speed. Often sightings of orange glowing lights after dark turn out to be nothing more than Chinese lanterns. Indeed it is even possible for lanterns to move positions in the sky and seem to follow one another as they drift on air currents. However I do not believe that this adequately explains what was seen in this case. The objects approached, passed overhead and vanished into the distance within the space of 6 seconds. It is inconceivable that lanterns would move at such a speed. Even when at relatively low altitude, where the structure and flickering flames are visible, they would still not be able to disappear in this short space of time. The objects that Michael witnessed were just glowing points of light and were clearly at high altitude. Also it was a very still night with no wind detectable, at least at ground level.

The other very important aspect of this sighting is the manoeuvres that the objects were seen to perform. They certainly appeared to be aware of each other and switching formations. As previously mentioned it is possible for drifting objects to appear to possess intelligence. However drifting objects such as lanterns always follow generally the same path across the sky. They can be buffeted around and shift positions, but it is extremely unlikely that they would suddenly at the same moment head off in two opposite directions. This particular manoeuvre certainly appears to have been performed for a particular purpose, indicating that the objects were under control.

Just as I have discovered with other cases I have previously investigated, not all glowing orbs seen after dark can be put down to Chinese lanterns or LED balloons, sometimes the facts point towards a much more unusual explanation.