On the evening of Friday 16th October 2009, witnesses Lesley and her daughter Becky would see some unusual lights in the sky from their home near in the Crown Hill housing estate, Milton Keynes. It was 8.30pm and Lesley was watching TV in the living room. Her daughter was upstairs and happened to glance out of the bedroom window. It was a clear and calm evening, with the stars visible but the moon out of sight. To the South she noticed a number of bright orange orbs of light moving in a Northern direction. They appeared to be quite large in size, low in the sky, and seemed to be moving about the same speed as a slow moving aircraft. 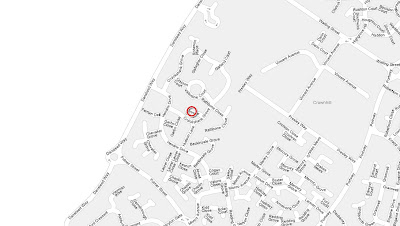 Becky called Lesley who then came to the window and also saw the lights. There were between six and eight of them and they were all moving in the same direction. They were constantly bright with no flickering visible. At first they appeared to be in a line but as they watched they started to spread out a bit. The object at the tail end appeared to be slower and lower in the sky than the other objects. It was also a deeper reddish colour than the others. Lesley opened the bedroom window and listened but could hear no noise coming from them.

They continued to watch the lights for about two minutes. Over this time they gradually spread out until they formed more of a horse-shoe like shape. The objects appeared to move to the North until they went out of sight. Both the witnesses were mystified as to what they had seen and had never seen anything like it before.

This sighting shows all the characteristics of Chinese lanterns, and it is these which I think are more than likely responsible for what was experienced. Lesley has watched some videos of lanterns on the net, and says that the lights they saw appeared bigger and brighter. However lanterns do often appear extremely bright and larger in size than they are in reality. They may not always flicker and can sometimes appear constantly bright.

Against the night sky it can be very hard to judge exactly how far away they are and how fast they are moving. The lights did not display any manoeuvres that would point towards them being under intelligent control. The fact that they began in a line before starting to move apart, and all moved in the same direction, suggests that they were all being launched from the same point and then drifting in an air current. Lesley said it was a calm evening with no wind, but at higher altitude there may well have been.

The light at the rear that was more reddish in colour may well have been a lantern which did not light as well as the others, this would also explain why it appeared to be lower than the other lights and not moving as fast. The more heated the air inside the lantern becomes, the faster it will rise into the sky. It is also possible that the other lights at a higher altitude were caught in a stronger air current than the final one.

Therefore, due to the numerous aspects described, I feel that this sighting was probably of a number of Chinese lanterns that were being launched from an unknown location near to the witnesses.