It was 11.15pm on 16th April 2011. Marc and his girlfriend Karen (name changed for privacy reasons) were about to go to bed at Marc’s house on Splott Road, Cardiff. Marc decided to take one last glance out of the first floor open bedroom window to the North West.

It was a clear still night with the moon and stars visible. It was now that he noticed an orange glowing orb of light moving towards the South. It seemed to be about 300 feet high and about 2 miles away from his position, though this was hard to judge as there was no point of reference. 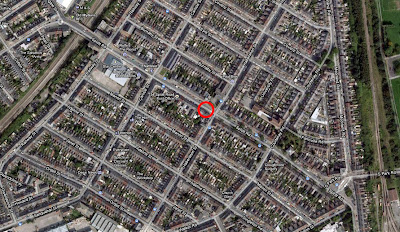 Marc called Karen over to the window and they both watched the object for about two minutes. It moved towards the South before seeming to gradually turn and head off in a South Westerly direction. During this time it slowly increased in altitude from 300 to about 1000 feet. It then seemed to fade and disappear. They continued to watch and a second object appeared. This was followed by three more identical objects. Each moved on the same course and at the same speed, and vanished like the first had. The couple were excited at what they were witnessing. After about 15 minutes no more objects appeared and they decided to head to sleep.

This incident was almost certainly a sighting of a number of Chinese lanterns that had been launched from a nearby celebration. All the aspects of the sighting fit in with this explanation, from the appearance, the movement pattern, the way in which the objects slowly increased in altitude, and the way in which they seemed to fade and vanish after a while. Lanterns tend to be launched in multiple and will follow the same course if caught in air currents. They slowly rise as they drift across the sky due to the hot air inside them. Eventually they burn out which makes them look like they have vanished without trace. While I cannot be absolutely sure that this was the cause of the lights seen, and Marc says that he is familiar with lanterns but these objects looked different, I still feel this is the most probable explanation.

Out of interest, Marc did mention that he has had some other quite different UFO sightings in addition to this one. If he decides to share these with me they will be added to this report in separate sections.