On the evening of Saturday 14th November, Pete Sloan and his girlfriend witnessed an unusual light in the sky over Knowle. They returned home from an evening meal at 8.30pm. As they got out of their car at their house, they became aware of an orange glow in the sky heading in their direction. Looking to the West they saw an orange orb of light moving in an Easterly direction. The light had a glowing haze around it as if it was passing through the atmosphere, although it appeared much too low for this to be the case. At first they assumed it must be an aeroplane but they then realised there were no other lights visible on it at all. As it was dark it was difficult to determine how high up the object was, but it appeared higher than a plane coming in to land would be. It was also hard to determine the size of the object. It was moving at a constant speed, slightly slower than a plane would appear to move at.

They watched as the object approached their position, passed overhead and moved away. It then disappeared from sight as it went behind the clouds. During the sighting the object was completely silent. They were both mystified by what they had seen. Pete is unaware if anyone else also saw the object. He checked online but could find no other reports of it. 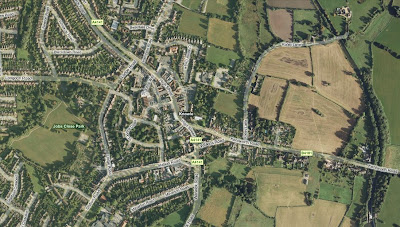 As with many other recent sightings, the object seen has the characteristics of a Chinese lantern. These appear as glowing orange orbs of light which drift in whichever way the wind is blowing at the time. They can stay adrift for up to 45 minutes, and due to their brightness can sometimes appear much larger or higher than they in fact are. Pete informed me it was quite a windy night, so this could account for the constant movement on a straight trajectory. Lanterns are quite popular at the moment and there are many sightings of them reported to both ourselves and to other groups/websites around the country. Of course I cannot say for definite that this is what was seen, but it does seem like the most fitting explanation for the sighting.