Shape of things to come?

Two young Black Country girls have become the latest people to sight the mysterious unidentified flying object which has been dubbed the Dudley Dorito. Chelsea and Casey Bridges drew sketches of the UFO after spotting it while lying in bed at their grandmother’s house in Chestnut Avenue, on the Priory estate, in Dudley, at about 9pm on Tuesday 8th Jan. Chelsea, aged seven, and Casey, aged nine, were drifting off to sleep when they saw the object flying over Dudley Castle.

The pair ran crying downstairs to tell their grandmother, Mrs Marie Bridges, aged 61, what they had seen and drew identical pictures of the strange craft.The sighting is the third time the mysterious object had been seen in the skies over the Black Country in the space of a month. In early December, dozens of people saw a huge orange “Dorito” with three lights flying over Halesowen and a similar object was seen by people living in Lower Gornal on New Year’s Day. 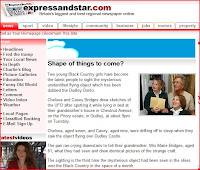 Householders in Wallows Wood described the object as looking like an “arrowhead” with three orange lights arranged in the shape of an isosceles triangle.The Express & Star has been bombarded with messages speculating what it could be.Mrs Bridges said it was the girls’ “spooked” reaction which made her realise something was not right. “I was sat watching the TV and the girls were sleeping in my bed when they ran into the lounge looking scared,” she said. “They were both frightened and said they were scared something was coming to get them and asked if they could stay downstairs with me because they didn’t want to go back upstairs. “I made them both draw a picture of what they saw. They both drew what looked like a diamond shape with lights, although Casey said it only had lights in each corner and Chelsea said it had lights all around it. They’re used to seeing planes and helicopters and they never bother them so it can’t have been something like that. I joked to them that it was ET going home, but it didn’t make them laugh. I really believe it could be something from another planet.”