The witness in this particular sighting is named Ash, and at the time of the incident he was attending Dudley College. It was about 1pm on Friday 13th February 2009. Despite some recent snowfalls, the weather had brightened up and there was a blue sky with light cloud. Ash went outside for a cigarette with several friends. He was standing on Castle View Parade within the Dudley College campus. For some reason he looked up into the sky, and almost directly over them was what looked like a jet black circle shaped object. The object appeared to be giving off a white mist. Ash does not know whether or not this was some form of propulsion system, but he did state that it certainly looked like a solid object rather than unusual natural phenomenon. The object was moving slowly across the sky.

Ash could not tell how big or how high up it was, he believes the object was quite large, about the size of a car. As far as he was aware it was completely silent. He pointed it out to his friends. They kept repeatedly looking up at the object as they had their cigarettes for several minutes. Then suddenly the object had completely vanished from sight. Ash had never seen anything like it before, and had no clue as to what it could have been. His friends were equally intrigued by it. 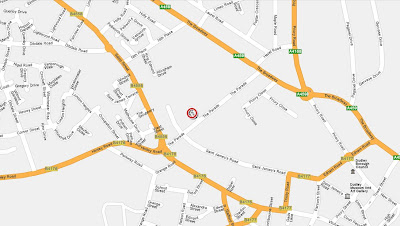 This is quite an unusual sighting. The appearance of mist around the object is very interesting, and fits in with numerous other reported UFO sightings. If it was some sort of balloon or kite then the mist would likely have not been visible, so it tends to dismiss these possibilities. It was a clear day so it is unlikely the mist was created by rain or moisture hitting the object. As the witnesses did not see the object perform any controlled movements we cannot say for definite that it was not something drifting in the sky rather than a powered object. As it took place in the middle of the day, it is possible other people also spotted the object.