Flying Triangle craft are one of the more regularly reported UFO types, especially over the last decade. In the majority of cases these craft are seen individually rather than in multiples. However this report covers an impressive sighting of a formation of eight triangular UFOs seen over Andover in Hampshire back in 2004.

Graham (name changed for privacy reasons) would often wake up early in the morning to let the dog out into the back garden of his house on Camelot Close. The morning of 12th September was no different. It was 5am, and was still dark outside. It was a clear morning and the stars were fully visible, though the glow of the morning sun could just be seen at the horizon. 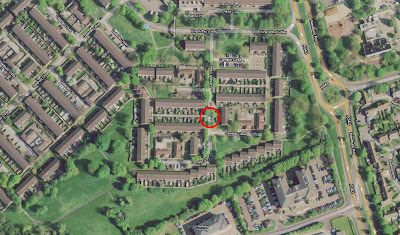 He looked up and noticed two satellites moving across the sky side by side. He had seen satellites on many occasions before but never two at once. His attention was then drawn to red flashing light towards the West coming over the top of the houses. He realised this light was coming from an object about 500 metres in altitude. When he initially spotted the object it was at an angle of about 30 degrees. It was moving on a straight and level course to the East and appeared to be under direct control. The object was moving quite slowly, between 20-30 mph.

As the object got closer Graham realised it was something very unusual indeed. It appeared to be a flattened triangular shaped object. The main body of the object appeared to be transparent, as if it had some kind of cloaking camouflage enabled. Along each side were eight red lights that were flashing in a repeating sequence. It looked to be between 15-20 metres across and several metres in depth.

The object flew past his location slightly to the north, roughly 500-1000 metres from his position. As it passed he could then make out what appeared to be two square purple-red coloured lights on the rear of the object. These were not as bright as the side lights and did not flash at all.

Graham was trying to work out what he was looking at when he noticed that there was a second object directly below the first. It appeared to be flying in formation with the other object. This lower object appeared to be about 200 metres high. He watched in amazement and fear as a second pair of identical objects appeared over the rooftops, roughly 300 metres behind the first pair. This was repeated two more times. Each time the pair of objects flew past him heading Eastward. They were all completely silent, and all flew in identical formations.

Graham noted that his pet dog seemed oblivious to the objects and did not react to them. In total the sighting lasted for 3 minutes. He was completely shocked and frightened as he realised that there was no rational explanation for what he was witnessing. The objects looked nothing like known military or commercial aircraft, but they certainly appeared to be advanced craft of some kind. Unfortunately Graham did not capture the objects on film, he was too transfixed watching them to run inside the house and grab his camera.

Shortly after the last pair of objects had vanished from sight, Graham heard a high altitude plane moving in from the South. This confirmed to him that the triangular objects had been silent. In the days following the sighting Graham asked around but nobody else appeared to have seen the objects. He did report the sighting to the National UFO Reporting Center (NUFORC), however he was unhappy that they appeared to have changed his words to include white lighting on the objects as well as red. He got in touch and asked them to correct this but they never did. Below is a link to the report he sent in to them:

Because they did not correct his report details, he lost faith in speaking about his experience on the net. It was only when he checked out Richard Hall’s website that he decided to get in touch.

This is a highly impressive incident which I feel more than likely a genuine sighting of advanced craft flying in formation, probably of extraterrestrial origin. They were clearly not normal aircraft, the lighting configuration on them was extremely unusual, and they appeared to have some kind of cloaking field enabled which made everything but the lights on them invisible. There is a possibility that they were not invisible but were just the same colour as the night sky giving the impression that they were transparent. If they were using some kind of camouflage, what would be the reason for this if the lights were still visible anyway?

The fact that the objects were not only moving on the same path but flew in pairs, equally spaced out, is I feel sufficient proof that the objects were under control and flying in formation rather than just drifting on air currents. If just one pair of objects were seen then this could be questionable, but it is extremely unlikely that four pairs of objects would all drift in exactly the same manner at exactly the same speed. Therefore electronically lit inflatables is not a sufficient explanation for what was seen.

Could they have been top secret military craft on an early morning flight exercise? This seems very unlikely – if such craft did exist it would make no sense at all for them to be flown over populated areas, even in the early hours of the morning. On the other hand, if the objects were extraterrestrial, they may well not care where they fly and who witnesses them. There are many many UFO sightings over highly populated locations which support this theory.

It is very unlikely that the objects were eight radio controlled models being flown on purpose as a hoax. If this were the case there would be no reason for them to be flown so early in the morning where there would be no guarantee anyone would see them. As far as Graham is aware, he is the only one who saw the objects (at least the only one who reported them), and he only saw them because he was putting out his pet dog. If the objects had some kind of cloaking enabled, this obviously puts models out of the question.

I feel the most probable explanation is that the objects were ET craft commonly referred to as Flying Triangles. Although a lot of the time these craft have a corner light and central light underneath, there are many other sightings reporting different lighting configurations. I have personally investigated cases where craft of this type have been seen with small lights along both sides, and also cases where rear lights have been seen. I have also investigated a number of cases where these craft have been either fully or semi-transparent, similar to how the witness describes. And one case I looked into involved a sighting of two triangular craft flying in formation with each other. So many of the elements that make up this incident have been seen and reported before, making it all the more probable to be genuine.

The witness strikes me as very believable, especially regarding how he acted in the days following the sighting. He is not out to gain anything through sharing his experience and I have no reason at all to doubt him about what he saw. This is a truly stunning sighting and one which certainly deserves answers. Were these craft invisible to radar, or was this formation picked up by local radar stations and subsequently covered up? What were the objects doing over Andover that morning? Where were they heading? What was their agenda? Is there someone out there who knows the answers to these questions?