This report covers a sighting by another paranormal investigator, Martin Evans, who was a former committee member of UFO Research Midlands (UFORM). He got in touch with me shortly after experiencing some intriguing UFOs in the area of Walsall.

On the evening of 12th February 2010 at approximately 9.05pm, Martin was walking along Hillary Street in Walsall, on his way to Morrisons supermarket. It was a cold and cloudy evening with only small gaps in the cloud. There was a slight breeze blowing. He suddenly noticed a glowing object in the sky to the South West. He at first thought it must be a police helicopter but then realised there were no navigation lights. Staring at the object he could see it was a glowing orb of light which was regularly pulsating between a white and red/orange colour. The object appeared to be moving slowly across the sky. It was hard to judge its size or how far it was away from him. 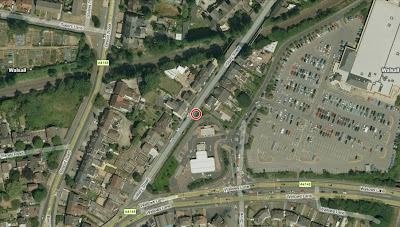 Martin watched the object for 2 minutes. He was wondering what it could be when suddenly two smaller red coloured orbs of light, which looked like red stars, dropped from the base of the object one at a time (2 seconds apart) and began descending towards the ground. He was amazed at this and felt the object was something highly unusual. Martin always carries his camera and binoculars, and scrambled to get them out. As he did, the red orbs almost reached the ground and then suddenly vanished without trace. The main object then made a sudden right angle turn and began heading away from his position. He took a couple of photographs but the object did not come out on them. It soon disappeared into a cloud and was lost from sight.

Soon after the sighting, he asked people further down the street and the manager in Morrisons whether they had seen anything, but nobody else had seen the objects.

Martin is a former Observer of the Royal Observer Corps (RAF). He is also a military and aviation expert. The objects were like nothing he had ever seen before and he was convinced they were of alien origin.

This is a very interesting sighting and certainly seems to have been of something unusual. The pulsating colour of the main object is completely different to that of any conventional aircraft, which have either static or strobing lights. It is also unlikely the object was a Chinese lantern. Lanterns do flicker but do not change from one colour to another constantly. The right angle turn that the object performed also suggests that it was under intelligent control rather than something simply drifting in the sky. It made this change of direction shortly after dropping the two smaller red lights which suggests it had deployed them and was then leaving the area.

The fact that the two smaller red lights apparently emerged from the main object again points towards it being something out of the ordinary such as a conventional aircraft, balloon or lantern. It is interesting to wonder what these smaller objects could have been and for what purpose they were deployed.

I find this a fascinating sighting and one which cannot easily be explained away.

Martin will shortly be sending through a drawing of what he saw, so check back soon.