At 10.32pm on Tuesday 11th January 2011, Ken Eagleton was out walking his dog in Camperdwn where he lives. It was a relatively clear evening with light cloud between which the stars could be seen, and a light breeze. Ken was on a lane just off Front Street, the main road through Camperdown. As he walked along the lane, he turned to look at his dog. It was now that he noticed a glowing orb of light in the sky to the South East East.

The light was red in colour and was pulsing continuously very fast which made it look like it was shimmering. It had what appeared to be a small white light at the base of it. The orb was between 500-1000 feet high. It was hard to judge how big it was. It appeared to be within 1-3 miles of his position.

Aerial map showing the approximate position of the witness: 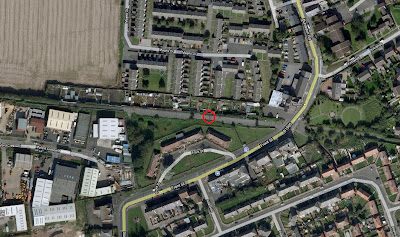 Photograph of the sighting location, with the orb drawn on top by the witness in the position it was first sighted: 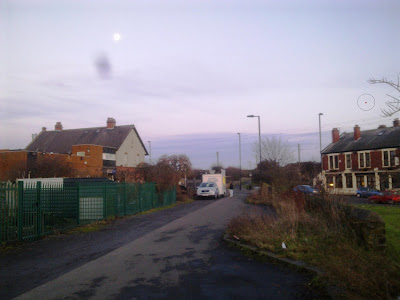 Ken was intrigued by the light as it did not look like a helicopter and was completely silent. The roads were quiet due to the time, and Ken is sure he would have heard noise coming from it if it was a helicopter or plane. The light was travelling to the North at quite a fast speed. He got out his camera phone and tried to record some footage of the orb but it would not pick it up against the dark sky.

Ken continued to watch the light as it moved across the sky from his right to his left, slowly gaining in altitude as it did. After about 15-20 seconds he caught sight of a second red orb identical to the first, and on the same trajectory at the same speed.

Photograph of the sighting location with the route of the orbs drawn on top by the witness: 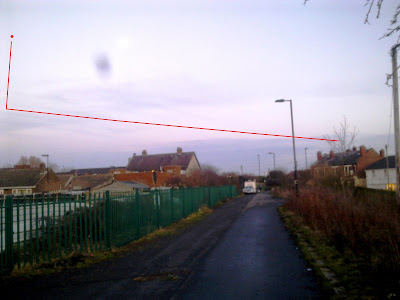 Before long both orbs vanished into some light cloud. Ken continued to watch the cloud which they had disappeared into for several minutes but they did not reappear. He decided to continue his walk home. He felt astonished at what he had just witnessed and decided to text three friends and call a fourth.

This is an interesting sighting, primarily because of the seemingly controlled manoeuvres the objects were seen to perform. As Ken points out, it is very unlikely the objects were helicopters as he would have heard the noise from them. They could not have been planes as they both slowed down and halted for a time.

Quite often orbs of light seen in the night sky turn out to be Chinese lanterns or LED balloons. The objects were the wrong colour for lanterns, which tend to be a fiery orange colour or sometimes appear yellow/white. Also the orbs were pulsing extremely fast and regularly, lanterns tend to flicker intermittently due to the flame inside of them. It is possible that the objects were two red and white LED balloons. This seems more probable than lanterns, as they could have been set to pulse fast. The gradual increase in altitude initially seen fits in with the objects being either lanterns, which rise due to the heated air inside them, or helium-filled LED balloons.

However the manoeuvres the orbs were then seen to perform do seem very controlled, possibly too controlled to have been caused by air currents. The first orb appeared to slow down and halt so that the second one could catch up with it. While the second was approaching it, it remained completely stationary in the sky. This is uncharacteristic of a lantern or inflatable, as these would still be seen to slowly increase in altitude and rise straight upwards. When the second orb was close enough they then made a sudden turn in direction and also started to rise at a much steeper angle than they had been previously. Again this seems like a controlled manoeuvre.

I can’t really say what the objects were in this case. On the one hand they showed some characteristics of lanterns, or more likely LED balloons. On the other hand they did seem to be moving with purpose as if under control. I guess it boils down to what you want to believe from the evidence that exists.