This report covers an unusual sighting of four triangular shaped objects which were observed over the Birmingham area in early September 2010.

At 8pm on the evening of 20th September 2010, Simon and Judith (Names changed for privacy reasons) were watching TV in their home on Brook Lane, Springfield, Birmingham. It was a clear evening and the sun had set. The curtains of the living room were still open. Simon happened to glance through the window a moment. He saw some glowing lights in the sky to the South. He pointed it out to Judith and they both took a closer look. 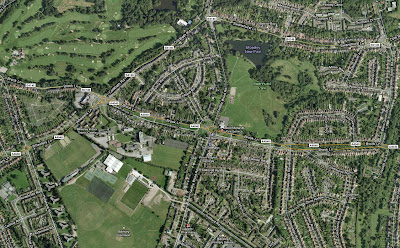 They saw a flattened triangular shaped object, like a diamond cut in half. Along each of the edges were what looked like red, white and blue lights. The blue and white lights were constant, where as the red ones appeared to be flickering. The main body of the object appeared dark. There was a glowing light at the base of the object which was constantly bright. It was hard to judge exactly how large it was, but it appeared sizeable.

The object was moving on a straight course. They watched it until it had flown out of sight. Soon afterwards a second identical object appeared, heading on the same path as the first. Over the next 5 minutes, four identical objects had been seen, all travelling in the same direction, and all spaced the same distance apart. The witnesses wondered what the objects could be and were fascinated by them.

This is an interesting sighting and one which it is hard to pin down an explanation for. The objects certainly had an unusual appearance, and did not look like conventional aircraft or balloons. The fact there were four of them means they were unlikely to be radio controlled models of some kind. They were clearly not typical Chinese lanterns, as these tend to appear as glowing orange/yellow orbs of light.

However the movement pattern of the objects and the fact they appeared one at a time suggests that they could have been inflatables drifting in an air current which had been launched from somewhere just as lanterns often are. Perhaps the objects were LED balloons. These are balloons which come in a variety of shapes and sizes, and are electronically lit by one or more LEDs. This seems like a possible explanation for the strange objects, but it is by no means a definite.

It is feasible that the objects were under control, but they did not display any manoeuvres which would definitely suggest intelligence. This sighting will probably remain a mystery. If you have any information about what these objects could have been, please get in touch.