Most UFO sightings reported to BUFOG are of objects seen in the air by witnesses with their feet firmly on the ground. However occasionally we receive details of sightings which have taken place from on board aeroplane flights. It makes perfect sense that if UFOs are flying around our airspace they will sometimes be observed by pilots and passengers.

This report covers an interesting sighting that took place over the French Alps in May 2011. It was reported to me via a member of BUFOG (you know who you are), after their friend related the story to them. Many thanks to them for finding out the majority of the information seen within this report.

It was 7am on the morning of 10th May 2011. The witness, who we shall call Matthew for the purpose of this report, was on board flight BHX 525. The aircraft had set out from Birmingham International airport an hour earlier, and was now flying over the French Alps. It was a very clear sunny day, with only light cloud visible.

Matthew was looking out of the aircraft window at the mountains below. Suddenly he saw a strange object ascending from below off to the left of the plane. The main body of the object was cigar shaped and white in colour. At the back it had what appeared to be a low tail and short fin-like wings sticking out. There was a black smoke vapour trail coming from the back of the object. It appeared to be an unusual craft of some kind.

The main fuselage of the craft seemed to be about 30 feet in length and 3-6 feet wide. It was about 500-1000 metres away from the plane, and was rising fast at an extremely rapid speed. As it got close to the plane, the UFO suddenly veered off to the left seemingly to avoid a collision. After about 20 seconds it was lost from sight due to the view from the window.

Witness drawing showing his view of the UFO and its black vapour trail from the window of the plane: 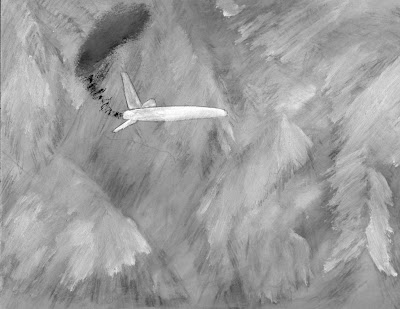 The witness is not aware if anyone else on the plane saw the strange craft. Nobody else seemed to react to it or discuss it afterwards so he assumes not. It is unknown whether the craft was picked up on radar.

The UFO in this sighting was clearly a controlled craft of some kind. I feel that the most likely explanation for what was seen was some kind of un-manned military drone which was being test flown in the area. The description of the object does fit in with it being one of these pilotless craft. Most military drones are white in colour, as the witness describes. They also tend to have short wings which are often positioned closer to the rear of the craft. Below are a couple of photographs of military drones for comparison: 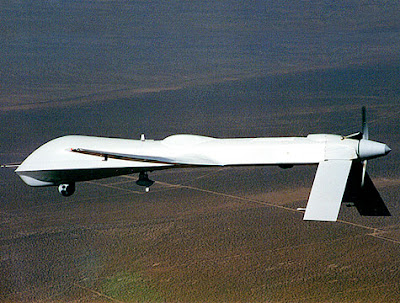 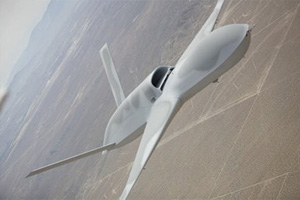 The witness has drawn short wings and a taller tail right at the rear of the craft, but this could have perhaps been an optical illusion caused by the angle the craft was being viewed from. Also the fact there was a vapour trail coming from it point towards it being man-made rather than extraterrestrial. It was seemingly moving at a fast speed, but did not perform any manoeuvres which would suggest it was something more unusual.

The fact that there was what appeared to be black smoke pouring from the rear of the craft suggests that it was perhaps having engine difficulties. Usually aircraft contrails are of course white in colour.

At present this is all that is known about the incident, but I hope to speak to the witness directly in due course as well as find out further details about the flight.