Late in the evening of 10th January 2009, Steve Kitts called a taxi to his house to pick up himself and a friend. The witnesses headed outside to wait for its arrival on Cottage Street, Kingswinford. It was a clear and still night, and about 10.30pm. Steve noticed a glowing orange orb of light in the sky above the houses on the opposite side of the road. It was about as high as a plane would be in mid-flight, but appeared to be moving faster than a plane. The object was travelling in a Southerly direction from the right to the left of their vision.

Both the witnesses took out their mobile phones and managed to capture video of the object (Watch the video footage at the base of this report). They watched it cross the sky in a straight path for about 70 seconds until it was out of sight. They heard no noise at all during the sighting and were convinced they were not observing a normal aircraft.

In the morning Steve watched the video footage and realised that he had managed to film something unusual. He decided to then look into the subject of UFOs on the internet and find out about other local sightings that had been taking place recently. 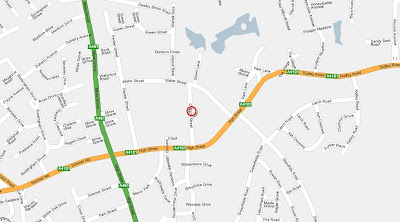 There is the possibility that the object that was filmed was an individual Chinese lantern in flight. These appear as orange orbs of light and tend to drift through the sky for up to half an hour. However to counteract this argument, Steve did mention that the object appeared to be travelling quite fast and on a straight path, which tends to suggest it was powered rather than just drifting in the wind. It certainly doesn’t look like it can be explained by a normal aircraft or helicopter as they do not display lights of this colour. It could possibly have been a radio controlled model with an orange light but this seems unlikely. For now it looks as if this particular sighting will remain unexplained...