The animal mutilation phenomenon is a very bizarre and disturbing aspect of the UFO subject. Despite there being a relatively low number of reported cases than with other aspects of the subject such as UFO sightings or abductions, especially within the UK, mutilations are still occurring and should not be ignored. The media rarely cover such incidents but this does not mean that they are not taking place. Some people believe that all mutilation cases have natural explanations, despite some very interesting evidence which suggests otherwise. However there are many researchers, myself included, who still consider them directly related to the extra-terrestrial presence on Earth.

While it is true that some cases have no doubt been the result of natural death and decay, there are others which have indicated removal of certain parts of the animal using sharp/heated cutting tools or where animals have been entirely drained of blood. There are also known cases where a UFO has been witnessed and then a mutilated animal has been found in the same area shortly afterwards. There also appears to be a military interest in the subject, as black military helicopters have often been reported hovering near to where mutilations have been discovered.

As Birmingham UFO Group is an urban-based group situated in one of the largest cities of the UK, it is unsurprising that we do not have many mutilation cases reported to us. Most mutilations take place on open farmland, something that Birmingham is not particularly well known for! However occasionally we have been sent details of suspected mutilation cases. This is one such example.

Andy Zukowski is a support worker from Tiverton in Devon. On 9th April 2011 he and two of his clients were out walking along a 3.5 mile long national footpath that runs through farmland between Collipriest and Bickleigh. It was about 4.30pm. The weather was dull and overcast but dry. The ground was a little damp but it did not look like it had rained for several days.

Aerial map showing locations of Collipriest (A) and Bickleigh (B): 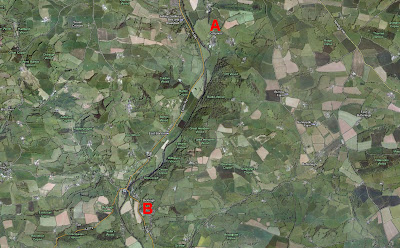 During the return leg of their walk they came across a number of dead sheep in various states of decay. This is not uncommon while out walking in Devon. All the carcasses looked completely normal as Andy would expect them to appear. After seeing about 5 carcasses Andy then noticed one lying in a field about 20 metres away from the edge of the path. The field lies alongside Tiverton sewage treatment works. There were some other carcasses nearby and some live sheep at the other end of the field.

Aerial photograph showing the location of the field: 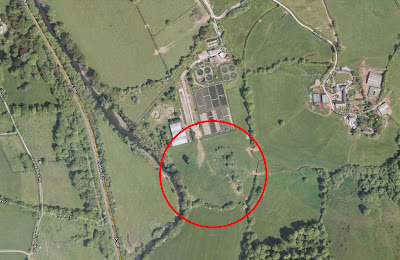 The carcass looked different to the others; its wounds looked unfamiliar to him. He and his clients approached it to take a closer look. The animal was lying on one side. On the upper side it was clear that the eye and the majority of the ear were missing. It had a large gaping hole around the rectal area. Considering the size of the wound there was no blood visible, or flesh on the ground beneath it. There was no blood surrounding the carcass, just a small amount running from the nose. The damage to the animal looked like clean cuts, there were no visible bite marks on it. There was some wool on the ground around the rear of the sheep, but it appeared that this could have been from shearing, as there was no blood on it and it was scattered rather than clearly from one direction.

The injuries visible on the carcass immediately reminded Andy of an animal mutilation, as he has an interest in the UFO subject and had seen mutilation photographs before. He says that he has never come across any other animal with wounds such as this in the 33 years he has been walking in Devon. After examining the carcass for about 20 minutes he and his clients then continued on their way. 20 minutes later Andy returned to the site with his brother to take some colour photographs of the animal.

Two days later he got in touch with BUFOG about his discovery. After discussing the carcass with Andy via E-Mail I made plans to drive down to Devon to see it with my own eyes. However the earliest I could do this would be Saturday the 13th April. I asked Andy if he could return to the location on the evening of the 12th to ensure that it was still present, which he agreed was a good course of action.

At 6.15pm Andy returned to the field where the animal had been situated. Unfortunately he discovered that all the dead sheep had been cleared away, probably by the farmer. There was nothing left on the ground where the animal had been lying. 90 minutes previously Andys friend Gareth had travelled out to the field to take a look at the carcass after seeing the photographs Andy had taken. When Andy spoke with him after returning to the field, Gareth informed him that he had seen some other dead sheep but not the one which had been photographed. It appears that this one had been cleared away first at an earlier point of time.

Due to the fact that the animal was cleared away, no further examination of it could take place. I therefore only have the photographs to base my analysis on.

Below are many of the photographs which Andy took of the dead sheep (Several similar photographs not included).

On approach to the carcass: 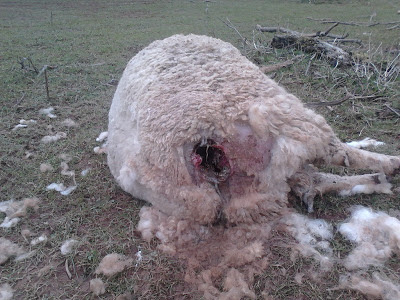 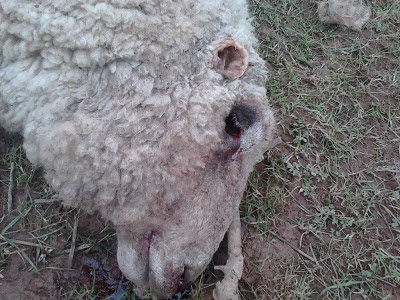 Close up of the remains of the right eye and ear: 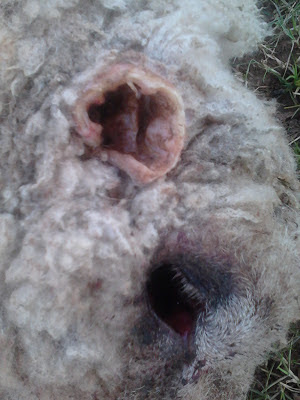 Patch of missing wool on body: 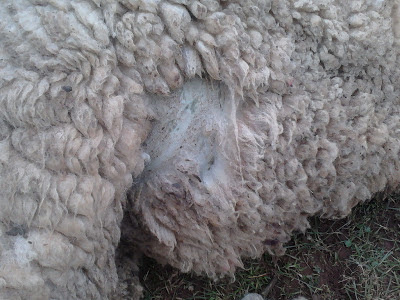 Rear of carcass and scattered wool on ground: 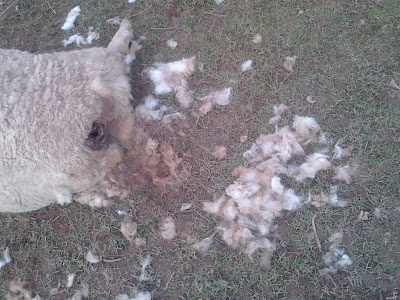 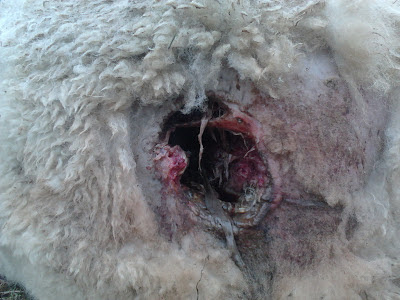 After examining the photographs of the carcass, I feel that it is probable that on this occasion the death of the animal was natural and this is not a mutilation. My conclusion is based on the following reasoning:

- The carcass seems a little bloated, and it is likely to have been there for a number of days despite the general lack of decomposition.

- There are no wounds on the animal which are obviously artificial.

- The eye and ear are the most fleshy parts of the head, and are therefore the parts which are removed first by scavengers.

- There is no removal of jaw flesh, a common trait of animal mutilation incidents.

- It does not appear that the animal has been drained of blood, as blood can be seen running from the nose.

- The damage around the rectal area and surrounding wool on the ground is likely to be the result of scavengers, and indicate that it has been used as an entry point into the carcass.

- There were other dead sheep in the nearby vicinity at different stages of decay. This shows that something had recently caused the decease of livestock in the area, probably the cold weather over the preceding weeks (I hope to verify this soon with the farmer)

In order to ensure that I was correct in my assumptions, I decided to contact Mike Freebury from the Animal Pathology Field Unit, a UK-based expert on animal mutilations. After sending him the photographs (with Andy’s permission), he replied with the following comments:

“It looks like a natural death to me. Unfortunately, we do not know how long the animal has been dead and we do not know if the tongue has been removed. I suspect that decomposition may be quite advanced and that wild animals, in particular rats and crows, have had a go at the carcass. The best time to get to a mute case is within 24 hours of death. A vet told me that the body can stay warm for up to 18 hours after death. A lot of sheep have died in this cold spell and this could be just another. However, with the body now disposed of we may never know for sure.”

As you can see, Mike’s thoughts on the photographs echo my own. At present it seems likely that this was not a mutilation case. However I would like to thank Andy for his initiative in taking the photographs and getting in touch. It is always best to remain observant rather than simply ignoring suspected mutilations, as reported incidents aid in deepening our understanding of this unsettling subject. I would also like to thank Mike for his comments on the photos.

If you come across any carcass which you suspect could be a mutilation, please take photographs if you are able and get in touch as soon as possible.