It was 8.50pm on the evening of 9th April 2010. David was driving home from his local gym in Burton-Upon-Trent. It was a clear evening and the sun had just set. He was almost home and driving along Derby Road when he suddenly noticed two glowing orange orbs over the Pirelli Football Stadium to the West of him. They appeared to be between 700-800 feet high and were constantly bright. As he watched, one of the lights suddenly vanished. 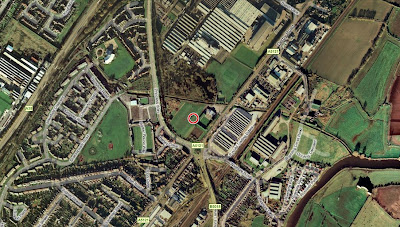 He arrived home just South of the stadium. Getting out of his car, he walked 5 yards to get a look at the remaining light. It was still present, and appeared to be hovering motionless and silent in the sky. After a couple of minutes, like the first light, it too suddenly vanished.

The lights looked very similar to others he had seen on the 4th April in West Yorkshire.

This particular incident shows all the signs associated with a sighting of Chinese lanterns, and I feel it was probably these that were responsible. Lanterns appear as glowing orange orbs of light, which sometimes remain constantly bright and sometimes flicker. When the flame inside them burns out they appear to dim and vanish without trace, as after dark the lantern itself will not be seen falling to the ground. The lights Dave saw showed no sign of being under intelligent control; they simply hovered in the sky and then vanished. It was a clear night, so there was no wind which could have caused them to drift. They may well have been slowly gaining altitude, but at a distance this may not have been visible. Not all orange lights seen in the night sky can be explained away as lanterns, but those seen here more than likely can be.